I had trouble getting the blog to work today. Lost it twice. I guess I finally was forced to switch over to the new version that goes thru Google? So, I have now done that and we'll see how this works--and if it looks any different or I have lost any older posts? My entire blog was supposedly moved?

Well, this is what I worked on last night--another layer of color on the petals and worked on the stems a little. 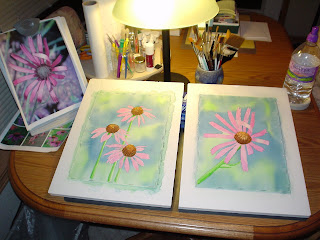 My paintings look better if you don't see pictures of what they are "supposed" to actually look like sitting right next to my novice "artistic interpretations"--hehe! 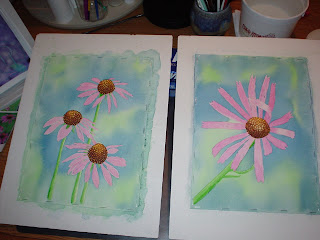 Dagan is coming to pick me up after work about 5ish tonight. We are going to finally work on some acrylic painting--ta da!! Leah is going to use Dagan and I as her willing guinea pigs again tonight, too--testing her home made pizza again!! Yummy! We had it Sunday night when I was over. Leah wants to feel she has it down before she invites some friends over to dinner for pizza. It was good the first time!! :)
I will pick up the cod liver oil capsules, too. I missed those when I was digging around in the dark in the back seat of the car on the way home from Target on Monday--hehe! Karma has been more than happy with the new Meow Mix "canned" food with sauce, tho, in the meantime. (It is in a small plastic container instead of a can.) Miss Karma gets her tablespoon or so of canned food in a special dish every morning. I take the chill off of it in the microwave if it has been in the frig, too. She isn't spoiled--you think?
I watched a really intriguing movie last night from Netflix. I am always fascinated by true stories and this movie was based on a memoir. Now I want to read the book! Talk about a basketfull of crazy folk, bizarre family life, and strange circumstances! I love a story of somebody surmounting difficulties in life! :) It was sad and funny and disturbing. Wouldn't be everybody's cup of tea, I am sure--but it was mine--hehe! Was called Running With Scissors:
When Deirdre Burroughs (Annette Bening) impulsively decides that her adolescent son Augusten (Joseph Cross) should be raised by her unconventional psychiatrist (Brian Cox), her choice to give him away changes the course of his life forever. An all-star ensemble cast -- including Gwyneth Paltrow, Joseph Fiennes, Evan Rachel Wood, Alec Baldwin and Jill Clayburgh -- drives this quirky adaptation of Augusten Burroughs's best-selling memoir.
Today I have been watching the first two episodes of another HBO series I have wanted to see--Carnivale. Set in the depression years--I love it so far! Lots of really strange folk in a carnival--right up my alley! And in the first episode you find out that this young man the carnival picked up (saved really) has a hidden ability--he can heal people and animals! And he sees visions of the future (WWII??)--and so does this preacher. so I am sure they'll run into each other eventually. I am totally hooked!!
Inbetween times, I also am still watching episodes of FarScape. Am finally on season three of that series I borrowed from Dagan and Leah--and am still enjoying it. I am sure I will have plenty to watch once I am not with Cable TV anymore. Probably still way too much--hehe!
Well, I am off to make a mug of my french vanilla internation coffee. :) Do you think Leah spoils me, too? Maybe it is a good thing for me that they don't have a cat!? ROFL!!!
Posted by Rita at 1:32 PM