Yesterday the office called me about the garage key. Right now they just had the key and don't have the remote, but I will get a new remote eventually. (Maybe somebody left and didn't turn it in?) The other apartment is empty right now, but as soon as they rent it they will need the garage. So they need me to move my stuff ASAP. I went to see the garage on my way home from picking up the key. There are bike hooks in the rafters--cool! Might be able to hang my bike up in the winter. This garage looked narrower to me, but I'm not sure if it is an optical illusion because it is empty? We'll see. Was nice and clean, no dents in the door, and the door worked beautifully with the key. :)
I called Leah when I got home. She said they would probably be able to come for a few hours on Saturday afternoon to switch garages. But--woke up today and it is miserable out! 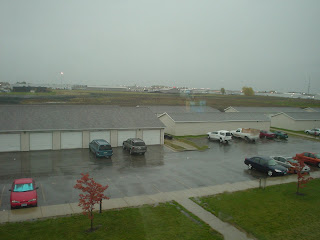 Can't even see out the screen. I looked online and it says it is supposed to be raining all weekend--and 40's and 50's for highs! We'd have to hope we could move inbetween showers. I wonder if they will change their minds?
Meanwhile--on a happier note--the cat toys!! Leah tied them using that cool clamp and then coated the thread with this black liquid plastic. We needed to hang them someplace to dry--used my clothespin magnets and the lamp chain. 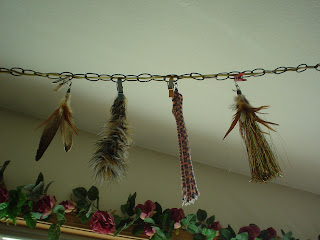 The two in the center are remade old toys. Redone so they can now be used on the "Da Bird" wand. They didn't fool Karma. She knew they were her "old" toys and had no interest. She wanted the new, exciting toys that Leah had constructed. :) 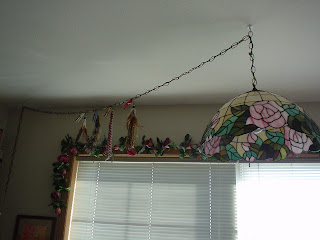 Anyways, Karma noticed them shortly after Leah left that night. She sat in the chair under them and cried for like five minutes. I kept telling her no. She finally gave up.

Yesterday I took all the toys down--hehe! Karma was crying in anticipation while I hooked them on to the string. Well, Miss Karma was a blur! I have not seen her leaping and moving that fast since she was a kitten! She went berserk! 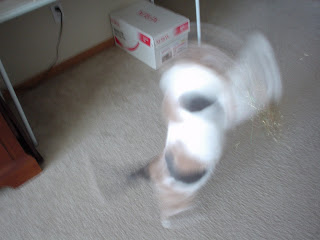 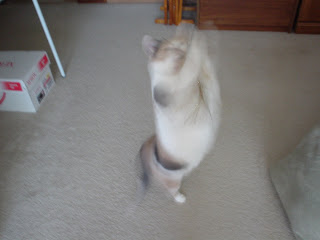 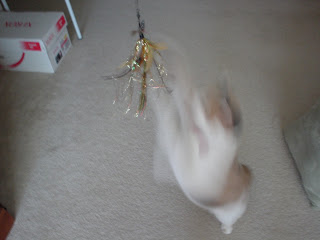 When she'd catch it--gripped tightly in her teeth at the base--she'd hunker down and fight me for it. Would not let go! I had to really pull to get it away from her--hehe! And the toys held together! 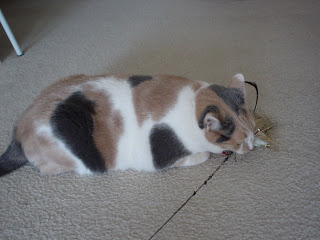 I wore her out completely! She was almost panting between her teeth, but she still wouldn't let go for quite a while after she caught it. 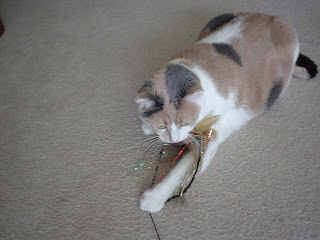 Until I finally wore her out and then I put it away. Karma slept deeply all afternoon--chuckle! 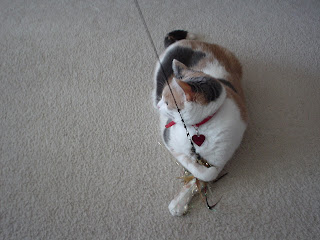 Thanks Leah!!! Definitely a success!!!
Well, here's hoping we get the garages switched tomorrow. :)
Posted by Rita at 8:55 AM