Good Morning! So glad to be sleeping again! 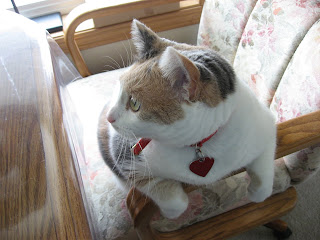 It is so much easier to get close-ups with this camera as it has a setting for it. And I can even get a picture of Karma's golden eyes much easier without them looking like headlights--hehe! Karma was pretty tired when I took these pictures. When I don't sleep well, she doesn't get in her usual 20 hours either--hehe! 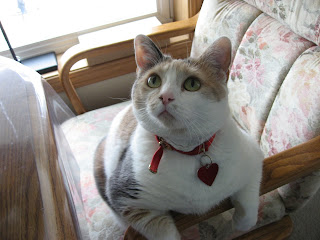 Sunny morning. 43 degrees. :)
Yesterday afternoon Leah and her brother-in-law, Chuck, came over to look at the shelving unit they use for their sales booth at ValleyCon. They want to add on to it this year--took part of it with them. Chuck used to be a carpenter for a contractor who built houses, so he and Leah are in charge of building things for their group for ValleyCon. :) I've never been to ValleyCon. It's an annual gamers convention weekend here in Fargo that is held around Halloween each year. They always have a booth there.
PitaPaseo didn't turn over the first time I turned the key--both times yesterday? But she did turn over the second time both times. Hummm? I think she'll be okay. She doesn't get out much, of course--hehe!
The lady came last night to pick up the cassettes, too. It is nice to be a part of http://freecycle.com/. I think I am going to offer a couple things soon. With the economy the way it is, I would think there will be a lot more people interested in free items--and sharing and trading goods & services. I bet there will be more and more websites similar to this one. There are already a lot of them! What a wonderful thing!
Oh, I had to chuckle. Those of you who know me know that I quit smoking in December of 1989, but that I have been occasionally smoking in my sleep/dreams since then--chuckle! For years I had been telling people in my dreams how I had cut way back on my smoking. I haven't remembered a dream about smoking for maybe a year or more--but just had one last night where somebody was saying to me (as I was puffing away) that they had thought I had quit? And I was telling them how I don't smoke at all for months at a time, but then I smoke for a short while. Cracks me up! All these years and I can't quite give up smoking in my dreams. Talk about an addict! Oh well, I am making progress, eh? Maybe by the time I'm in my 70's I'll have finally quit smoking in my sleep--ROFL!! Whatever works, eh? I haven't had a cigarette for going on 19 years--but I am still puffing away in my dreams once in a while--hehe! Sad, but true! Hehehe! Something to chuckle about today. Later!
Posted by Rita at 8:18 AM

WTG on participating in the Freecycle program.

ROTFL re. your smoking dreams.....they seem quite vivid too but, at least, it's the healthier option. :)

Serena, do they have freecycle.org down in Australia?