Really wore Karma out with the new toys again--hehe! 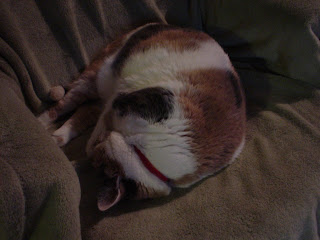 I forgot to mention that Dagan and Leah didn't come to switch garages yesterday--made other plans--maybe next weekend? I told them that was fine as long as they didn't rent it out, but if they did rent it then I would have to have things moved ASAP no matter when that is. They let me move in early here because it was empty and they might want to do that for this apartment, also. Just so Dagan and Leah are aware.
Oh--the flower and bird books were $35.00 dollars each, BTW. :)
http://www.orientalartsupply.com/
Yesterday--went down to get the mail. Got in the elevator. It was acting weirder than usual (is usually quite noisy and clunky). Took forever for it to come up to third floor, the door opened a little on the slow side, and when the elevator made it down to first floor it just sat there. Silent. Nothing. The door didn't open.
And didn't open.....
I pressed the button for second floor to see if it would move again. Nothing!
I tried to shake and rattle the door. Nothing.
Now I was really getting worried. Saturday--nobody around in the office and little traffic in the building compared to weekdays...
Shouldered as hard into it as I could...a few times...
Finally the door creaked and very, very slowly crept open. I leapt out sideways as soon as I could! Whew! Creepy! I climbing the three flights of stairs and called the emergency number to report the scary elevator (answering service, of course). A man called me back a few minutes later and got all the details. Said he was coming out to look at it. I haven't been out there today--no mail on Sunday, of course.
Good incentive to use the stairs, eh?!!!!
I have never been stuck in an elevator before. My next step would have been to examine the control panel and look for emergency buttons, etc. I never got to that point, but I wonder if it has an emergency phone or what exactly IS in there for those wonderful occasions when a person can't get out? There's no door in the top--or none you can get to, anyways. The ceiling has a sheet of glass or Plexiglas--the lights are behind that glass. I am so short I could never reach anything in the ceiling in the first place--hehe! You'd end up sitting by the door and pounding and calling out for help--shudder! Glad I got out.
Other than that--it has been a quiet, rainy, dark weekend. Still raining--and cold. Would not have been fun to move stuff, that's for sure. Been raining so steadily that everything is soaked. The kid's playground area looks like a pond. Not expected to stop until tomorrow afternoon. Good days to hibernate and watch DVDs and read!
Posted by Rita at 8:28 AM

I'm so glad you didn't get stuck in the lift. They usually do have an emergency button but not sure whether that is a buzz too the office or not.

I made myself get in "the lift" again on Monday. Had a flashback moment there before the door opened--hehe! But it did open and it is working okay again. That was really, really creepy tho!!