Well, yesterday the top to the cat box finally broke. Caroline was vacuuming out the bottom and leaned on the top somehow--and the screws popped right out. Didn't take much--I heard it, of course. 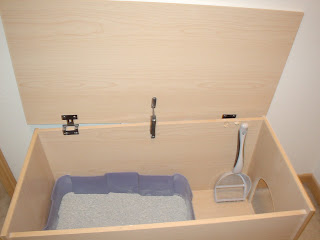 I just mentioned a little while back in the blog how the top has been sprung and hasn't closed but halfway for about a year or more. Well, the screws came right out--pop! 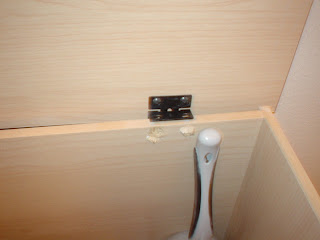 Leah, our "tool girl" is going to take a look at it today before we go shopping. I'm not concerned--the box has been broken for a long time and the top wouldn't close. If we had to remove the top altogether that's okay I told Leah. She said--no way! She'd find a way to fix the top. I'm sure we could remove that center thing that broke long ago (was supposed to keep the top from slamming down) and just move the right hinge over. Might at least have a top that closes again. Karma might not like it--hehe!
I did talk to Caroline about giving me too much in the Bed Bath & Beyond gift certificate--but she insisted. I suppose since I am a client it makes her feel better about it. I was so thankful and surprised! Caroline seemed happy--and the laptop is working fine. Her boyfriend is already talking about putting more RAM in it? Speed? Not sure-hehe!
After Caroline left I went down to the office. Only one lady was there (the one who had been scowly--but she wasn't scowly this time)--she seemed surprised they hadn't already called me. She heard them talking, she said. Since the owners are not putting in any more garage door openers, they came up with a compromise. I would have to switch garages and they'd switch the numbers over the garage. She said she'd have someone call me.
Later the other girl called. I will have garage 202A--which is being cleaned out right now. When it is cleaned out (and I guess it needs a different opener?) they'll give me a while to move my stuff and then switch the numbers over the garages. It is a compromise. They could have said no.
I emailed Dagan and Leah. Leah responded right away and was not happy about moving everything out of my garage. That shelf unit they put in is really a pain to move. I don't know if it can be moved without taking it apart again. It is very heavy. She thought they should put in a garage door opener for me. I wish they would have, but the owners said no--so this is the compromise.
Dagan and Leah are thinking about whether it is worth it to just buy one for me and have it installed...?? They probably regret having given me the car to use in the first place.
I am feeling like a burden today. :(
Posted by Rita at 9:02 AM