The beginning of the week I emailed Arnold Grummer's website to ask them what they suggest as the best way to adhere the white paper moulds to handmade paper. I've tried several things and some don't work at all. Who better to know than the company that makes the handmade papermills, right? I got an email back from a lady named Kim. She said that they prefer foam tapes or white glue--and said she had been sent some samples and would send me one.
Isn't this nice?!! Arrived yesterday. Strangers have really been wonderful in my life lately, haven't they? :):) 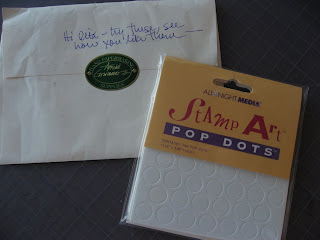 Talk about restoring your faith in humanity! 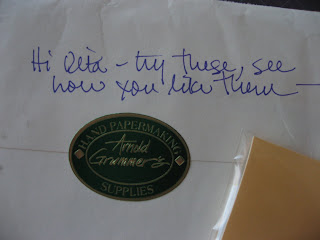 I can hardly wait to try them! 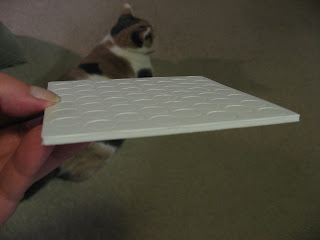 And if these work better than the liquid glue--you can buy big rolls of foam tape, too, for cheaper. That was one thing I hadn't tried. :)
Well, let's see....
I finished The Amber Spyglass book and liked it so much I reordered The Golden Compass to watch again. Just felt like revisiting all the characters visually once again. :)
I watched Australia and really liked it! Here's what I said on Facebook last night: it has panoramic views, suspense, good vs. evil, romance, family, fighting the elements, prejudice, triumphs, war, setbacks, humor, sorrow, and a bit of cowboy and cattle--yes--was quite entertaining!! :)
It also has a bit of magical powers (one that took my breath away), history, breaking a monopoly, how you can fall in love with a child who is not yours, villainy, a little Wizard of Oz, how cultural traditions are important, and Hugh Jackman with his shirt off--hehe! Just has a whole lot packed into this movie. No wonder it is so long--hehe! But it was engaging and I didn't realize how much time had passed.
Here's the Netflix summary:
In the days leading up to World War II, Lady Sarah Ashley (Nicole Kidman) inherits a sprawling cattle ranch in northern Australia. Threatened by land barons, she reluctantly joins her farmhand (Hugh Jackman) as he drives 2,000 head of cattle across the outback. While on the grueling trek, they witness the Japanese bombing of Darwin, which heralds Australia's entry into the war. Director Baz Luhrmann co-wrote this captivating historical epic Oscar nominated for Best Costume Design.

Tomorrow I am supposed to get The Golden Compass to lose myself in this weekend. Funny--they both have Nicole Kidman in them--hehe! I'm not a particular fan of hers, but she was actually very good in both these movies.
I kept the place shut up with the AC on all night and have a loud fan in my bedroom (hey--it was $9.99 at Target--what can I say--hehe!)--but the LLL still woke me up around 2:30am. I couldn't really hear her laughing this time. The voices were like buzzing insects from the field beneath the noise of my fan--at least that's what I tried to tell myself--hehe! It was the door slamming that woke me. At first I thought it was terrible, shake-the-floor thunder. But it was just the lady downstairs. The last I looked at the clock it was about 3am. I fell back to sleep not too long after that. Thank goodness! :)
I'm beginning to hope somebody calls and complains about her. I realize there is a lot of misery down there and can have empathy--but I really don't want her foisting it on me and others in the middle of the night. *sigh* This too shall pass. Always does. At least it has so far.
They usually evict people who keep "disturbing the peace" around here--thank goodness! But then they usually get really loud--often--before they leave--chuckle! Makes you greatly appreciate the quiet nights after they have finally moved out.
It's just a part of apartment living. Certainly not unexpected. And at least here they have evicted them. I've lived in places where they don't give a hoot what goes on in their buildings. But if the police are called enough times they finally have to pay attention. I think there are fines to the owners after so many visits, but I'm not positive. Might have been local ordinances, too?
Anyways, just a part of living on top of each other like we do. And now I know if the fan is on and the window is shut that I can't hear the shouting as well--just the door slamming vibrating the floor. I can turn on my sound machine (which is actually set on thunderstorm) and pretend it is real thunder. ROFL!!
Speaking of--another day of clouds and rain and possible thunderstorms this afternoon--near 80 degrees. We're closed up, tho. Karma and I are comfy and dry.
Have a great day! :):)
Posted by Rita at 8:15 AM