The excitement never ends around here! Just ask Karma! ROFL!!
Yesterday morning a fledgling bird landed right on the porch screen. Karma raced in there and froze below the flapping young bird. 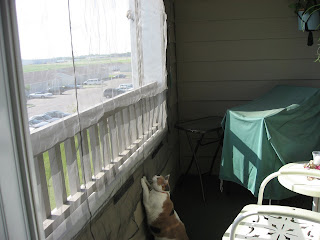 I was afraid that it's tiny claws had gotten stuck in the mesh of the screen because it flapped a while and then just hung there. 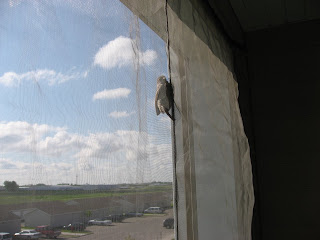 As I walked around to the other side to see if the bird could move--the parents were going absolutely crazy! Screeching, hovering, and dive-bombing me as close as they could get to the screen. I slowly sweet talked the little bird to calm it down. 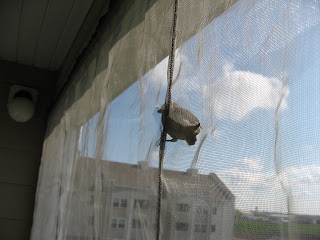 Suddenly it just flew off the screen to race off with the relieved parents. I think it was just exhausted learning to fly and there aren't a ton of places to land in North Dakota--ROFL!! Just kidding. :)

Karma stayed frozen for some time after the young bird left--hoping it would come back and looking wistfully up at the screen. I am convinced these are the things Karma is remembering fondly in her twitchy dreams. 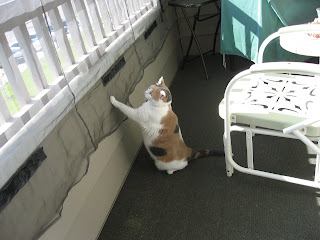 Yesterday Caroline came. :) It was a beautiful day. I spent most of the afternoon going thru a deep stack of catalogs--or "wish books" as they used to call them--hehe! The majority of them ended up in the recycling bin.
We had a frost warning last night! In June! I know--I know--my fault for having put plants outside on the porch--ROFL! Murphy's Law--hehe! No really--they were fine out there all night.
But I am tired today. The loud, laughing lady from below me woke me up around 11:30pm. The doors slamming are the screen door and the porch door. No fight this time--she was just the LLL (LoudLaughingLady) having a great time. But then--something was on her porch--there was actual high, ear-piercing screaming and thudding about? I heard her telling someone else that she knew it was dead but she wanted it out of there anyways--as I firmly shut (slammed down) my bedroom window. I'm not clear as to whether they found something dead out on her porch and the other person was teasing her with it or if they killed something down there last night? I hope it was a bug--that's all I can say--because my mind automatically went to the baby bird, of course.
Anyways, this new woman apparently likes the porch occasionally--late night--and doesn't seem to remember that she doesn't live alone here. After my window pounded shut I think they were trying to be quieter--but I heard the doors occasionally slamming shut until I fell back to sleep some time after midnight.
Normally I wouldn't deliberately slam a window closed like that. I don't know what got into me!? I didn't the first time with her 4am fighting. (Not that I didn't want to--hehe!) They can hear me close the window anyways--even if I try to do it quietly--because we are close together--right on top of each other, I believe--and the windows are noisy in the first place. I didn't call and complain about her, but if anyone did or does--now she'll think it was me. Sometimes people retaliate. I prefer to be basically invisible when it comes to apartment living. I won't do it again. Well, at least I don't think I will? But then again--I'm already on her list now....hummm? ROFL!
Miss Karma cried to go out on the porch right away this morning--well, after her treat, of course--hehe! She's out there crying softly--looking for the baby bird on the screen. I wonder if she misses Gracie?
This afternoon at 1pm I go to the dentist for a regular exam. I'm not looking forward to what they will find. I know I have a tooth or two that hurts when I drink anything really cold. Not good. Like I said, I haven't had coverage and haven't been in for many years. My own fault. Should have been good and gone anyways--found a way despite poverty and fear--hehe! Now I am paying the piper. That's life. Today will be a breeze, tho--just xrays and checking to see what all they have to do in future visits--no drilling or even teeth cleaning. Shouldn't take very long.
Then I have my monthly CashWise grocery order coming in late afternoon between 4-6pm. It will be a busy enough day for me--hehe! Leah stopped by and put the paper in PitaPaseo's window that says the new plates have been ordered. Had to change over from Minnesota to North Dakota now that Dagan and Leah moved. Pita is their car--they just let me use her. :)
So today--Pita and I will be out and about around town. Later... :):)
Posted by Rita at 7:57 AM

You and I seem to think alike when it comes to wildlife....I sure do hope it wasn't the young fledgling killed on your neighbour's patio. I agree, nowadays, you have to be careful of retaliation. I need to learn to keep quiet but it's very hard when I see people doing the wrong thing, particularly when someone else is being victimised. Like you, I prefer to remain unseen but, sometimes, I just can't help myself. lol

How is the move for Leah's Mum coming along?

Hi Serena!
Been great weather for moving lately. Not too hot during the day and cool at night. I'm not sure if they will be done yet today with all the moving. No news is good news, right? hehe!

Ha! Sounds like we do think alike on wildlife. I immediately thought of the little bird. But--I used to never even kill bugs when I was young, but now--truth be told--I do usually kill the bugs that make it in here under the bottom gaps in the porch screen. :(