Amazing! Two days and the order arrived from Blue Heron in a tube mailer! 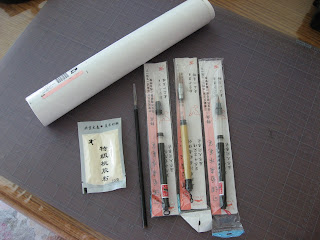 Peach Sap Powder or Peach Glue--rat whisker brush--and the three "fountain" brushes. You can see the clear tube part of the three brushes where the water gets sucked up into the handle. :) 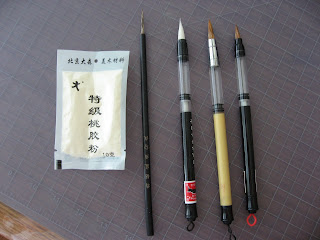 I think Henry said in one of his videos that the rat whisker brush is actually made from rabbit hair? Then the white one is a goat/wolf hair combination brush. Then there's a synthetic and rabbit hair blend. And finally a small wolf hair brush. TaDa!! 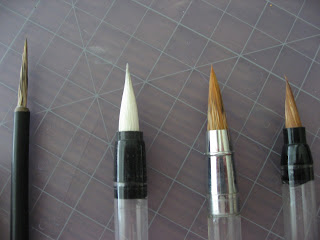 You can also buy any of the three separately.
I put the Peach Glue into a small jar. Figured I'd get confused down the road if I wrote "glue"--just might forget what it was for and try to glue something with it--hehe! 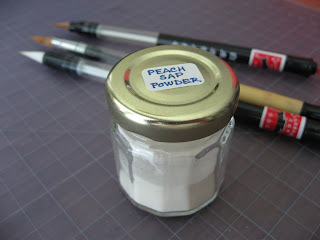 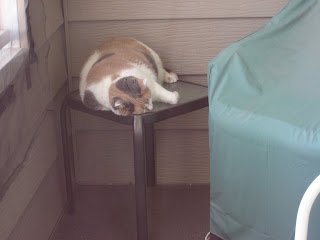 ...because she has to try out everything new around here, of course. 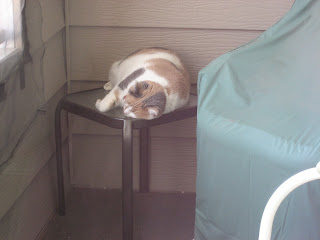 When she came in her fur felt damp! And the heat exhausted her, of course. 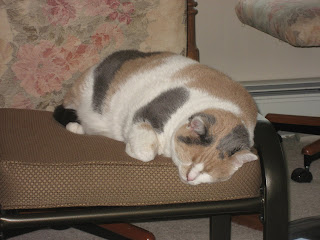 A huge line of bad thunderstorms was heading towards Grand Forks in the early evening. People started sighting tornadoes. They preempted ABC, CBS, and NBC up here for close to three hours--until around 9pm. Six tornadoes were sighted, but I don't think any of them hit the town of Grand Forks? I was flipping about to other channels, but I don't think anybody was hurt? Not positive what the damages were.
Anyways, because of the weather and all three networks covering it at once I didn't get to see the tributes to Michael and Farrah, but I have no doubt that there will be a lot more--about Michael Jackson, at least.
I remember him as a small boy with his brothers. He was so cute! Was turning into a handsome young man--so talented! I never could understand--like most of us--why he hated what he looked like so much that he ended up looking so deformed and bizarre. He was a wounded soul--in many ways.
The storms rolled over us here about midnight as I was going to bed. Listening to the thunder and seeing the lightning flashes light up the bedroom--I chuckled to myself. I get that every night with the thunderstorm on my sound machine and the blue tooth recharging on my headboard--ROFL!!
I do so LOVE thunderstorms!! And the real ones are better! :):)
Posted by Rita at 10:57 AM