Yesterday was a day for things breaking or not working. This cart (it's upside down, of course) sits between my washer and dryer filled with the washing paraphernalia. I was doing a short load so that I could wash the dish cloths (for ironing the handmade paper) and a sock fell down behind this cart. I had to pull the whole cart out and up over the edge of the carpet... 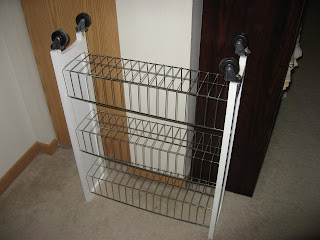 ...and the back wheels broke right off! So I tried to glue them back in and the cart has been sitting like this in the hallway ever since. I sure hope the wheels hold up when I try to fill it up again! 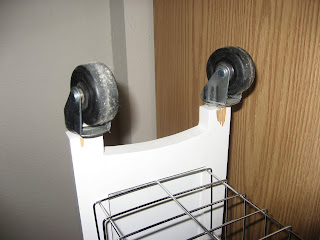 I puttered about and filled the two storage boxes I got on sale at JoAnn's. The black one... 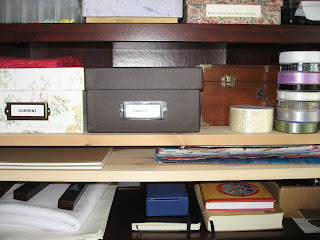 ...and the white one. Can't use the cover on this one because it holds the spritzer bottles and such, but that's okay. :) 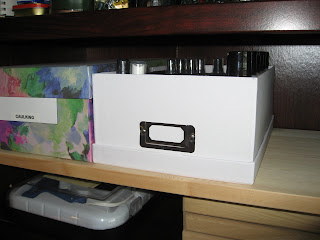 The other thing that happened right after I finished the blog and was checking emails--the wireless mouse died. Since the other one I was using on the laptop had previously died, I couldn't really access the Internet. (I have the worst time with those little finger pad thingies on the laptops!)
Dagan stopped by after work with an extra mouse. He did the exact same things I had done that he had taught me, right? Turned everything off, unplugged and replugged, etc. But for Dagan--the man with the magic techie touch--it worked again just like that! But he left me the other wireless mouse! So now I have one for the laptop again without moving them back and forth.
He had to take off because they were going to a meeting at 6:30pm for RepowerND. Leah is still sick with the bad cold and cough, poor thing. Dagan wondered if she'd still want to go. Well, they went. I saw them both (in separate close-ups) on the 10pm news on ABC--sitting in the audience in a 30 second spot about the starting up of a local group of www.RepowerAmerica.org. :):) Funny I happened to leave the TV on and didn't change the channel. I don't often watch the actual news program. I get the weather online a lot. I'll have to let them know I saw them--hehe!
80s yesterday--so Miss Karma spent most of the day on the porch soaking up the heat. 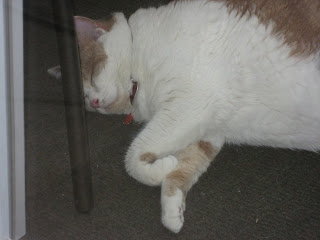 She was only inside in the late morning-early afternoon as a storm rolled thru and dropped some more rain upon us. 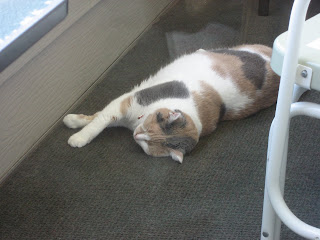 I think she was overly glad to see the sun and feel that summer has arrived and settled in.
I was in the apartment with the AC on. :):)
I guess I'll see if the wheels on the cart hold up today. ?? :):)
Posted by Rita at 11:02 AM

good luck with the broken cart. hopefully, the glue will do the trick.

my wireless mouse has been playing up lately....now and then, it will act like it's totally dead but there is no low battery warning on the screen. instead of replacing the batteries, all i need to do is swap the positions around of the two batteries that are already in there and VOILA! it works! i have no idea why....maybe it's more to do with the battery contacts inside the mouse??? thank heavens for rechargeable batteries though because both our wireless keyboard and mouse go through batteries fairly quickly.

colds and flu sure make me feel miserable so i sympathise with leah....i hope she feels better soon.

how cool that you have some TV celebrities in your family now...hehehe

Glue didn't do the trick--hehe!

I've also heard of licking the contacts on the batteries and have tried that and it works too sometimes--hehe! The first thing I always check is the batteries. We have bought rechargables because we go thru them so fast.

They looked like serious TV celebrities--hehe! Listening so intently. :):)