My order finally arrived from Scrap Simply--ordered May 10th. I think they were waiting for a paper delivery? Anyways--more 12 X 12 inch papers on sale. I went for wild, colorful, and some stripes. (Saw online how easy it is to cut up striped paper and use them for borders on cards.) 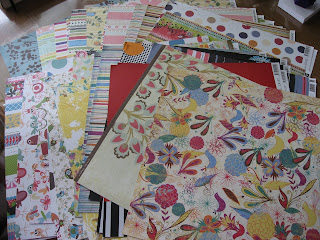 Also got a little bit of ribbon. Didn't realize that if you ordered 2 yards that they are apparently pre-cut into 1 yard sections. Nice cloth ribbon, tho! :) 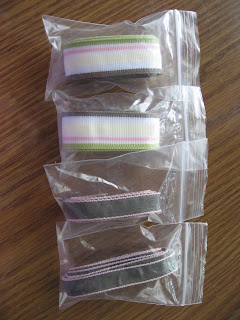 They had great prices! 25-65 cents a sheet for paper I'd pay 65-1.99 a sheet for at the local craft stores. And I can get two bookcard covers from each sheet with leftovers for making cards! Nice way for me to spend a small part of my stimulus check--hehe!

The sun suddenly emerged yesterday in the early evening. Sunny this morning, too. They're still predicting rain for today and tomorrow--but maybe it will miss us for at least part of the day? 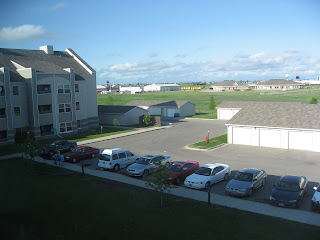 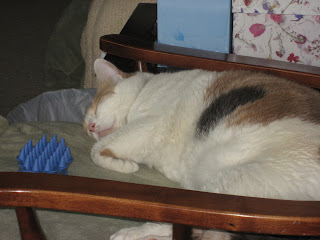 I spent the entire morning working on the Soul Coaching book and listening to Carlos Nakai's native American flute. I have to agree with you, Serena. The chapter on Death--the third level where you are supposed to imagine your own death in different scenarios--was a little weird for me. Didn't do it.

I am not afraid of death. Have had a few close calls since I was a kid--drowning, tornado, etc. My life never flashed before my eyes and I had no regrets. Just calmly thought--Oh, so this is how I am going to die.

When I think about it--I am more afraid of not dying and being left alive in tremendous pain, to be honest. Like being burned or in a terrible car crash or something like that. But death--nope.

[Note: if you don't believe in past lives, out-of-body experiences and such--feel free to skip the rest of this post.]

I had my one out-of-body experience when Dagan was an infant (with GA)--awesome! Long story, but I was taken to a place where there were no physical bodies and nothing could be hidden. Everything about a soul was right there to be known--good and bad--and there was such love and understanding. I was taken there so I could forgive and gain perspective--right before Dagan ended up in the hospital. Looking back, I think GA knew he had to get through to me--get my soul in the right place--before Dagan ended up in the hospital dying and we found out about all the heart defects and they told us he wouldn't live, etc, etc. Therefore, I was spiritually focused--and GA and I were never more connected than back then for Dagan. :):)

And years later (maybe 1995?) under hypnosis I spontaneously went back to a lifetime where I had the backs of my knees sliced open so I couldn't run away and was being held down & raped while I bled to death--and I was pregnant big as a house--charming, right? But all I knew was I had been running, then terrible pain in my knees, and then I had pain in my stomach and my wrists. Then I kept skipping to being dead--hehe! (Do you blame me?!) The hypnotist kept trying to get me to go back and gather more information about what in the world was happening and who was doing this to me--but I just kept leaving and jumping to being dead--hehe! Very frustrating for the hypnotist, but hey--being dead was beautiful and peaceful. It filled my soul and lifted me up into such joy I can't even describe it. I didn't care who was doing whatever or why--just wanted to get to the dead part--ROFL!!
They say hypnosis can't make you do anything you don't want to. That was really true in my case--hehe! I think I died at least five times in his office chair that day--ROFL!!

Okay--as long as I told you that much--three of us had gone together to the hypnotist--a girl I worked with and her friend. We wanted to see if we had known each other in France in the 1500s. I had been having dreams about a lifetime back then and apparently many people I know in this lifetime--well, we were all in France together.

Anyways, we were all in the room. The other two girls were sitting quietly in chairs against the far wall while I had my session. It felt like they were supposed to be in there with me. Everything happens for a reason, right? Turned out there was a huge reason why I went to that particular lifetime. While I was being raped and killed over and over in the chair--(chuckle)--the two girls were the ones who were each separately actually remembering what was happening to me. They were both silently crying and staring at me--so each didn't know the other one was experiencing anything. The hypnotist had his back to them, so he never knew that was happening--and me--I just kept running--having stabbing pain in my knees--stomach and wrists--crying and panting in pain--and then became suddenly silent, breathing peacefully, and looking beatific, I guess. I thought it had been quite a failure of a session. I had no idea what I had been experiencing.

After we left the hypnotist--we all chatted about the experience. It was then that they told me and each other what they experienced. (Needless to say--it freaked us all out! We told the hypnotist later.) The girl I worked with--she remembered being a man in that lifetime and that she was raping me. Her friend had been his mother in that lifetime--and had held me down for him.

The backstory they remembered--I had been married off to an older man specifically to have an heir. (None of us had any clue as to what time period this was or where.) The mother had been his commoner mistress for decades and the son was the only male heir--illegitimate, but a male heir. Now that I came into the picture--and got pregnant right away--all the mother's years of working on this man to make her son his legal heir--gone! The son was more my age and had fallen in love with me--and yet hated me at the same time. They had even lived in his house with him and had all the privileges--until I came and they got booted out before he married me. They planned to make it look like I had been robbed and killed. The rape was just an added angry bonus for the son because I had scorned his advances. They remembered that they had been publicly hung later.

They both had their memories separately--and between the two of them that was the story. I only had the physical memory of the pain in my body--couldn't see any of what was happening. But because we all went together in this lifetime--and they remembered and were ashamed and in tears--I could forgive them. It was all about forgiveness.

And a week or so later, as I was waking up one morning, I got more of the story from GA. I think I have mentioned that GA isn't really an angel--but a guiding spirit and I have known him before. Well, in that lifetime GA was my handmaiden or whatever they call them. She and I had practically grown up together--she took care of my clothes, hair and such and we were fast companions and loved each other dearly. When I was given away in marriage to this older man, I insisted she come with me to my new home. She was my only friend.

I used to go on these walks alone by a river and GA worried about me because I was fearless in some respects--or naive, selfish, stubborn, and ignorant, some would say--hehe! On that day GA was secretly tailing me to keep an eye on me as she said she always did. But when they chased me, caught me, and sliced my legs at the knee--the whole time--she stayed hidden in the bushes--watching the whole thing. She was afraid to show herself because she knew they would have to kill her, too. She couldn't move from the position she was in--even to go get help--or she would be seen.

When they left me for dead--GA rushed to my side, crying. I went to that place--like when I jumped to being dead--but I remembered the baby--my innocent baby. I willed myself back into my body. Now I don't know what happened--if I asked GA to cut the baby out or I had gone into labor because of the trauma and birthed the baby--don't remember that part--but the baby lived and then I died. The baby was Dagan--and GA basically raised him in that lifetime. GA exposed the woman and her son and they were hung. Dagan was proclaimed this miracle child in that life, too! ROFL!! But he was very spoiled and revered because of it and grew into a selfish, arrogant man.

Kind of explains why Dagan and GA and I were sooo connected while I was raising him in this lifetime. And why I was so overly conscious of Dagan not being spoiled or selfish--hehe!

GA wanted to be forgiven for not trying to help me when I was attacked. Absolutely! GA is totally forgiven. Made me cry right now to even think GA would need my forgiveness for anything.

My goodness--didn't think I was going to tell that whole story. Oh well. I have always had dreams or visions of pieces of past lives--many years apart, but I have had a few of them. If they are just my imagination--well, if they lead to good things, that's okay with me, too. But with the two girls having visions/memories of the same thing at the same time--and such a bizarre story...and then getting additional information from GA later....???? I'm usually quite the doubting Thomas, but that made a 95% believer out of me. :):)

I asked a long, long time ago that I only have memories if they will help me with something in this life. No point otherwise. People can get lost in trying to remember everything and every lifetime--what a waste of time--IMHO, anyways. It would be like trying to go back and re-live every single day in this lifetime--duh! Unless I can gain some insight to help me on my current path.... :):)


Anyways, back to the real world--the current world--ROFL!! I spent the afternoon finishing the latest of Caroline's books I had been reading. Then read the first chapter of The Amber Spyglass in the evening.

I have had to write this all in a couple of hour sessions. It's already 11am! Half the day is gone--hehe! I hope you enjoyed my past life story. Real to me, but you can absolutely take it with a grain of salt. :):)
Posted by Rita at 7:57 AM