I was busy moving things around yesterday. I moved the boom box from the top of my headboard in the bedroom to the top of my curio cabinet in the living room. 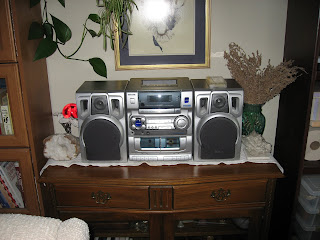 My headboard looks so bare to me now. :) 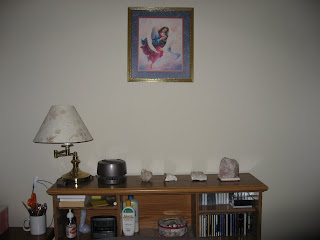 Why? Well, I was talking to John in Labrador about his native flute playing and how I have a couple Carlos Nakai cassettes stored away with all my old cassette tapes--and how maybe I should find them.

Then I was working on the Soul Coaching book all afternoon and I was on the section that tells you how you should change things and start new habits. 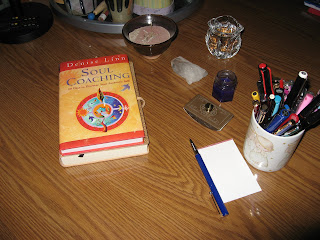 I had two boom boxes when I moved in here on which I could play cassettes--one in the living room and the one in the bedroom on the headboard. The one in the living room died the first year I was here, as I recall. It used to take up a whole shelf in one of the craft bookcases--so I never replaced it because I wanted the extra room.
But since then--for probably three years--I have not been listening to music except on rare occasions. If I remember, I put on something softly soothing when we do Sacred Circle. I do have a very few CDs that I can play on the computer (because Dagan and Leah warned me that my cassettes were going to going the way of the dinosaur)--but the computer and music never has quite jelled in my brain for some reason. I learned about Pandora from Ruby, but I forget about it most of the time--just like I forget the fact I can play CDs on the computer, too.
Anyways, I needed a spot that was large enough and out of the way enough to keep the boom box out here. The top of the curio has been kind of my sacred space--so it never occurred to me to take things off and put the boom box there--but that was the only spot that would work. So--I just took a deep breath and went to work.
I haven't gone thru my cassettes yet. Actually they take up an entire drawer in one of my bedroom dressers! But--already in the boom box was Music To Disappear In by Raphael. I learned to meditate to that music. GA wanted me to learn how to meditate, but I couldn't shut off the mind chatter. GA suggested playing quiet music without any voices. Ruby sent me Music To Disappear In and it worked--of course.
Since I listened to this particular album repeatedly to learn meditation I am like Pavlov's dog when I hear it--hehe! My heart rate goes down and a calmness comes over my entire being with the very first notes. I forgot how music can kind of blanket me in peace. :) I have it on right now. Ahhh!!!
I have no idea if any of that has anything to do with it but--I slept through the night. ??
I don't remember the last time I slept all night long without getting up at least once and sometimes almost every hour on the hour. Those of you with fibromyalgia or other chronic conditions know what I am talking about. I felt like I had lost time. Like the Twilight Zone. Like a black out. ROFL!! No lie! It felt very, very strange. Good--but peculiar and alien. :) I was almost afraid to mention it--like I would jinx myself or something, you know? But I don't care. It might not happen again, anyways, right? And it was definitely noteworthy--well, to me at least--chuckle! :):)
I've been spending so much time on the porch--decided that it was about time to move out my two hanging plants. So last night at dusk I got out the step stool. :) 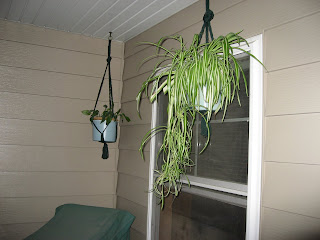 Oh, and I have been remembering the red handmade paper every few days. I used layers of newspapers to try to dry them while I was pressing them (which I probably should have been doing from the beginning). They were almost dry yesterday so I took them out of the layers and just found something to lay across the top of them so they don't curl up at the very end here--hehe! 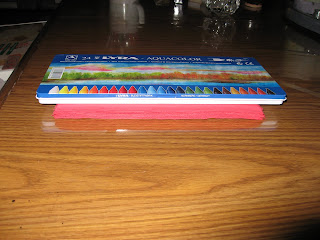 Yes--they are much more even and flat. :) 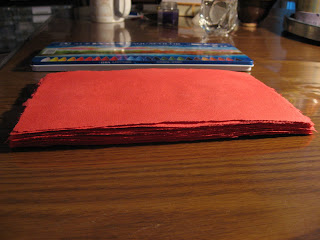 I never did get around to snooping online for information on pressing handmade paper. Been using up my computer time too quickly lately. Especially now that I have a timer and am being good about not overdoing things--hehe! (Speaking of--it just went off so I have to wrap this up--chuckle!)
This was Karma last night. It's quite the rarity for her to sit on the metal chair. But I had covered up the comfy one for the night and she was trying to be closer to the hanging plants to check them out. Anything new, right? 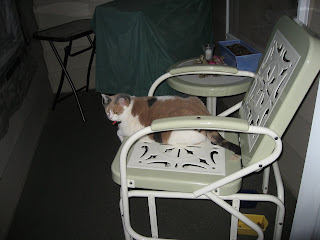 Caroline comes later this morning. Maybe today I will dig into my cassettes... :):)
Posted by Rita at 6:49 AM