Okay--you have to laugh! I rolled the cart around and it seemed okay--so I filled it back up and went to push it into its spot... 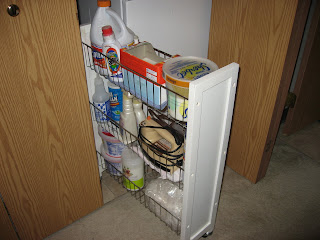 ...and a wheel fell off right away--hehe! 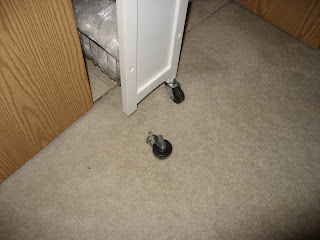 Honestly--I didn't want to deal with it right then--so I pushed it in, leaned it against the dryer, closed the doors, and walked away. After all--it won't go anywhere, right? hehe! I think it is time to confer with my tool girl, Leah. :) 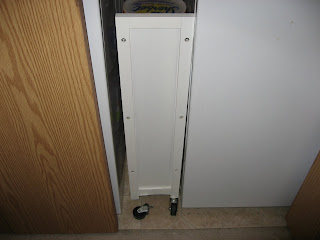 Warning! Been thinking--hehe!
I know poor people are often treated differently in the United States because Dagan and I were on food stamps when he was little. I saw the looks of disgust. I have been evaluated from down the nose of many a soul in my poorer times. My fortunes have gone up & down and up & down from middle class to working class poor to below poverty level to homeless (teenager) in my lifetime. I have been with and around people who loved to wave their actual wads of cash in other people's faces and watch the way most salespeople treat them with deference. I am familiar with different sides of our society.
But I have never been the one treated with deference.
I've been an avid reader and writer since I was about nine. I am extremely nearsighted and need good light to read. All my life one of my fantasy items was to have a really good bright reading lamp with a dimmer. [The other was an antique roll top desk--but I'd have had no place for it most everywhere I've lived and I know the trouble other people have had moving with their roll top desks. Guess that's one of those unanswered prayers in my case, eh? ROFL!]
After dealing with workman's comp for a couple of years and finally finding two jobs I could do to make ends meet. They were in the same senior building and I put in an average total of 113 hours a week. One was in lieu of my apartment rent and the other was having four different positions in the office at once for $8.00 an hour.
Anyways, I was able to buy some decent furniture while I lived there--tada! And I went into a lamp store in Minneapolis to buy my fantasy lamp. The lady clerk halfheartedly asked me if I needed any help. I told her I was looking for a good bright floor lamp for reading. She steered me to their cheapest models, of course--but they didn't fit what I was looking for. When I headed over to the Holtkotter lamps she didn't even follow me. I know the look. She expected me to check the price tag and probably head out the door shortly.
This was about 12 years ago. The lamp was I think $318.00 on sale--marked down from $500 and something. When I asked her if we could turn it on so I could see how bright it was--well! Suddenly her attitude changed--hehe! She was more gracious and helpful and alert--altho still doubtful until I wrote the check--ROFL!! I remember she told me that the German Holtkotter lamps were the Cadillac of lamps. Was probably the most extravagant purchase I've ever made.
Okay--move ahead almost ten years--the glass shield has cracked off, my spare bulb burned out, I've moved to FargoMoorhead area, and have no car. I checked around online back then and found a place in Boston that carried Holtkotter lamps. The lamps had gone up to a little over $700 by then and it would have cost me about $50 with shipping for the glass shield and a bulb! I procrastinate--for over two years--ROFL!! Everything is timing, right?
Times are hard all over. Today--Holtkotter also has a new, more contemporary version (rectangular instead of round lamp shade and longer swing arm) of my pharmacy floor lamp. They run closer to $800 now--but--I can find them on sale everywhere online from $518-649.00. And all their lamps seem to be on sale. Yup--times are hard.
When I showed up at the Drake Loft asking about a glass shield and bulb for my Holtkotter lamp last week--me--I was kind of given the royal treatment. As I told you, she took down my information and called me back. She had called the Holtkotter headquarters about the bulb shield--and she called the other store in town for me, as I said, to find the bulb for me. I thought that was so nice of her! But it hadn't occurred to me yet why she was being so nice.
When I went to pick up the bulb at The Lighthouse--(I'm chuckling already)--well, I told the lady I needed a bulb for my Holtkotter floor lamp and I watched her perk right up! Oh--aren't they the most wonderful lamps, she exclaims in that soft tone I'd heard clerks and salepeople use on the folks I watched throw money around over the years. The lady went on about the quality and workmanship as she looked up the proper bulb for me for my "top of the line" lamp.
Confession. Confession. I wandered over to the Holtkotter lamps I saw across the aisle from the service desk and casually glanced at the pricetag on a floorlamp with two lights ($998.00 on sale) and kind of looked it over like I just might be interested while she rang up my one light bulb for $12.93. How totally silly and shallow of me.
Then I drove over to the Drake Loft to pick up the glass bulb shield--FOR FREE! Yes--the company sent me the replacement shield for nothing. I guess they are being extra nice to people who can afford one of their lamps these days--ROFL!! The lady was soooo nice to me as I picked up the glass shield. They get this certain tone and cadence to their voice that I have heard but never had personally directed towards me--hehe!
Timing is everything. Hard times and I saved over $35.00 getting my lamp up and shining again.
I do not normally get free parts! 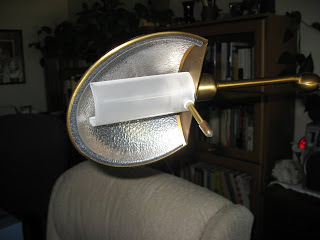 I told Dagan the story when he came by and got the mouse going again--and we laughed! If they had all only known that I went without my treasured lamp for over two years because I could barely afford to fix it--and I live in low income housing--etc, etc....ROFL!
It's funny--but it is also sad and unfair that people with money get treated differently in this world--or in this country, at least. Just as people without money are treated differently.
Times are changing, tho. The majority of Americans are one heart attack or accident away from losing everything, as they say.
This morning. I've lived in some form of low income housing or subsidised housing four times in my life--and I have never seen this! I saw two of these big moving trucks pull up yesterday, but they didn't unload. The other was Mayflower, I think. Amazing! 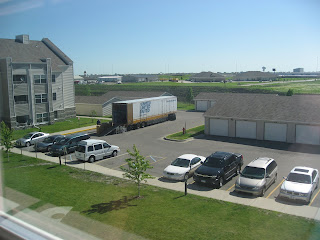 It costs thousands of dollars to hire a moving company to box and move you. I have never, ever seen a family move into low income housing or even the cheaper apartment buildings with a genuine professional moving van and movers! I have rarely even seen anybody use the cheapest of cheap apartment movers little truck like I had to--(because I can't lift and at the time Dagan had his hernia and Leah's asthma is the worst in the cold weather--was February). I especially live in the U-Haul, borrow somebody's truck, make a hundred trips in the hatchback world--hehe!
Jobs are being lost. People who absolutely believed it could never happen to them...have had it happen to them. The old American "if you work hard you will do well" anthem is not being heard so much anymore.
I was the working poor. One accident away from homeless. I did have an accident and then, while trying to claw my way out of my financial hole by going to college, one long slow freefall into a series of chronic health problems--and I landed here. Whew! Avoided being homeless, tho--tada! I am beyond grateful!! :):)
Times they are a changing.
Maybe after all the dust has settled this will be a very good thing in the long run. Things were so crazy and ridiculous with the designer shoes and bags, gold chains, designer pets, Hummers, SUVs, bigger-or-more-is-better mentality. I always thought those materialistic values were dreadful "goals" for people. We've been bombarded with that for decades everywhere we turn. I think it is a good thing for that to change.
I love the fact that now we consistently hear about going green and recycling--about volunteering and helping each other! I am absolutely loving that! About time!! :):):) I think we are headed in the right direction again. May be a rough road for a while--but we can do this! We can change--and be the better for it in the long run.
I believe in us. I believe in humanity. :):)
Think positive and have a great day!!
Posted by Rita at 10:15 AM