I realized that I had forgotten the prompt yesterday, but they don't post them on the weekend so I can catch up then if I want to. Too much other stuff to tell you...so...since it is technically Friday and I am awake...here we go! ;)
****
I had no idea Dagan was taking some pictures with my camera. He caught Karma napping under the art table in her cat bed... 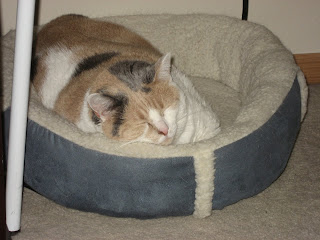 ...Leah at the craft table (she was very tired and still coughing, poor thing)... 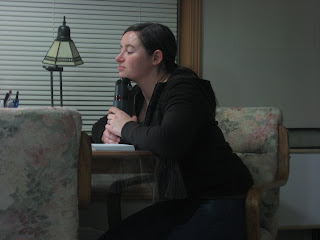 ...himself sitting in my chair--LOL! 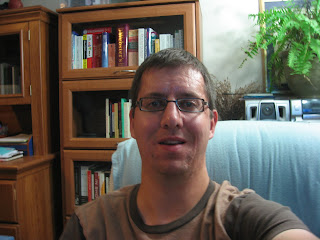 Surprised me at the craft table... 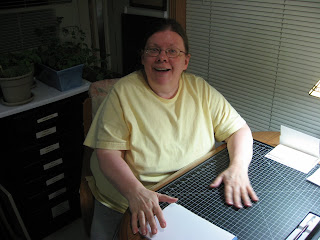 ...and Leah just laughed because she had seen him coming--LOL! 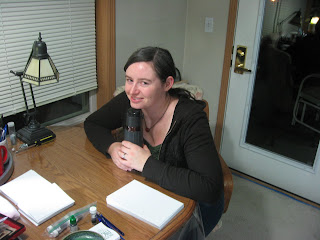 So, I snapped a pic of Dagan, too. Not knowing he had already taken one of himself. 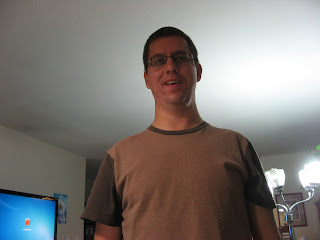 Silly! Anyways...it was a productive night!
****
First thing they jumped the Paseo...which took a while because it had been sitting there dead for about a month or more. They got the boxes onto my little green cart for me that I wanted--photos and nostalgia! I wheeled that inside while Leah zoomed the car around for a while and then parked it in the parking lot and left it running. Later Dagan went down and parked it back in the garage.
****
So, I have transportation again. I need to get some gas for her next week. I am going to aim for taking her out once a week. Then if I can't make it some weeks--well, maybe I can average out to 2-3 times a month, I'm hoping.
****
We had dinner. I am really impressed with the Quorn brand of fake chicken and hamburger. Dagan and Leah even liked it okay, too. Made a chicken and rice stir fry with steamed broccoli and had chocolate brownie frozen yogurt for dessert! :)
****
Dagan puttered about with computers. He has a new tiny laptop he got at BestBuy that's not much larger than a big tablet. He checks for updates on my computers for me. (I am not allowed to download anymore due to grievous errors in judgment--LOL!) Don't ask me how, but he saw I had recorded a program on Steve Jobs that was on PBS and he copied it onto his tiny laptop so he could watch it later! The mysteries of the computer world. ;)
****
Meanwhile, Leah sliced up apples and set them up in the dehydrator. She soaked them in a lemon juice and water bath first so they wouldn't turn brown. I'll take pictures. We are trying to make apple chips. She told me Subway now actually sells apple chips!
****
Leah and I figured out a very, very simple Christmas card to make this year. This is all I will show you so far...hehe! I was showing Leah my gifts and some of the new things I had purchased last month. She wanted to see my new glass pen from GouletPens--that actually works! Leah had also bought a glass pen years ago that never worked, either, that she finally gave away. So she wanted to play with one that actually worked...fun!
****
We got to talking and I told her how I had heard that you were supposed to be able to use sandpaper on the tip to try to fix them if they didn't work. I had tried it a little, but didn't notice it helped at all with my old cobalt blue set. Okay, they didn't work anyways, right? So I told Leah she was welcome to play around with the sandpaper and see what she could do with them. What could it hurt? I've had them 20-25 years and they have never worked anyways. So we weren't worried about ruining them, right? Lo and behold...
Leah created a glass pen miracle!!! 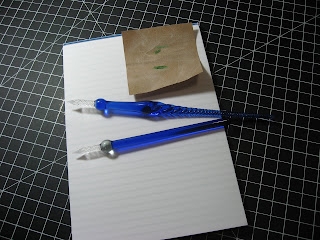 She actually got these two old glass pens to work!! I still can't believe it!! We were so excited that Dagan had to come over and see what the heck was happening--LOL! I will have to make a video about how she fixed them and show you how they work.
****
I know. I know. I promised a glass pen video and haven't gotten around to it yet. Slow as molasses in January! Now I have even more exciting stuff to show you, so maybe it was a good thing I was slow...this time--LOL!]
****
Was wonderful to see them both. I hope Leah rests up and gets well. She's on the mend, though. It's been such a year. We are glad we figured out the simplest cards we could make this year. No extras for etsy this time, either. The shop is on hold until after the holidays. Come 2012 I will be getting that car out and about--hehe! Planning on me going over to their place for a while to work with Leah on the etsy shop instead of them coming over here. Maybe make some handmade paper, too. All those supplies are over at their place. We'll see. :)
****
Not sure how much longer I'll be awake. (Starting to yawn.) I'll probably do the Thursday and Friday prompts this weekend. Weekend! The weekend is almost here already. Goodness! Well, enjoy it to the fullest!! Be back soon!! :):)
Posted by Rita at 3:46 AM