I think we had rain. Or maybe it was the day before. I have to look to see what day it is before I blog when I am this tired. This pic was from Monday afternoon, though. 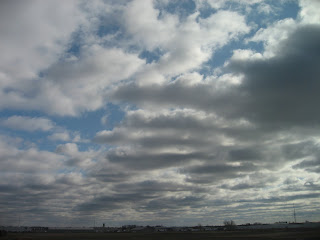 No naps for me. About 2pm the maintenance man arrived. Karma was watching everything...from a safe distance, of course... 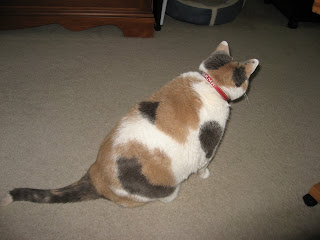 ...until he wheeled in his big cart to leave inside the door while he went to find a bigger ballast for the kitchen light fixture. Here it was striped down, wires dangling. Karma hid under the end table for the remainder of his long visit. 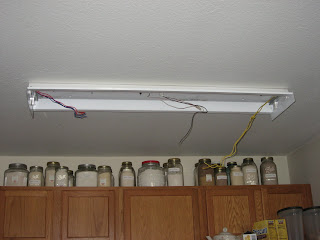 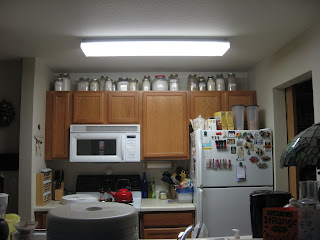 He had a terrible time with the kitchen faucet that was leaking from the base. 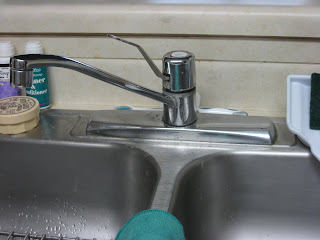 There was grunting, a couple big pliers, sweating, pauses, heavy breathing, and a red face...I was concerned because he is a sweet older man. But he finally succeeded. The corroded old faucet has a gap now, but it works like a charm...smooth as butter. So smooth I thought I was going to tear it right up and off when I went to use it the first time--LOL! I was so used to it being stiff and having to use force...gave me the giggles! 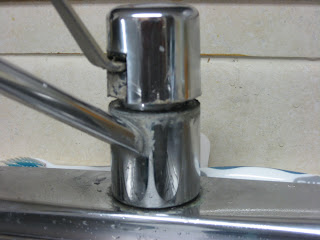 While he was working on the faucet, the UPS man arrived!! I pushed the box off to the side and out of his way. After he finished with the kitchen faucet, he went and worked on the bathroom sink. That was a project, too! Poor guy! He had to remove pipe from under the sink and run water into a bucket he had and use giant brushes. Gross stuff in there!! Never had that one cleaned since I moved in. Gag!
****
He was finally done around 3:45pm. I asked if he was swamped with repairs before the inspection? No. He was actually glad I had called. The problem is, he said, that people don't call. They find all these things wrong when they do the inspection and then he's swamped afterwards. Huh? What is it with people?!
****
Well, I tried to leave the box alone after he left, but I just couldn't. I pushed it out into the entryway there... 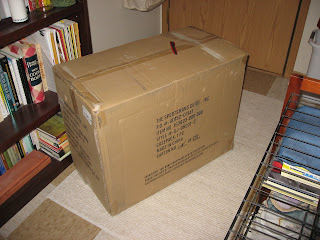 ...cut it open, tipped it on its side, and had a heck of a time sliding it out of the box mostly one-handed and using my foot. Tight fit and really packaged well!! Those black corner pieces on the thick styrofoam are actually a stiff plastic! Plus they had cardboard corner protectors on the cabinet itself, too, and the strips of padding tucked over all the drawer knobs. 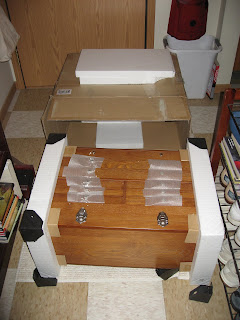 You know who was immediately sticking her nose into the box half filled with styrofoam... 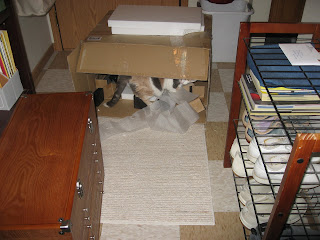 ...checking out the packing materials... 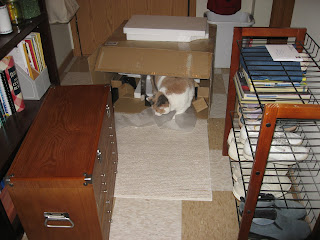 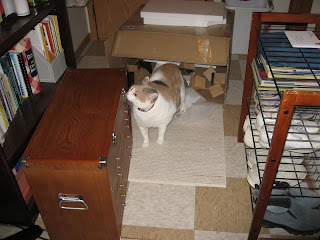 ...trying to butt her head right through the styrofoam! As if!! 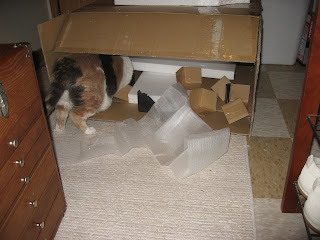 Didn't work, so she laid at the entrance to the box for a while. I knew this box wasn't going to stay around. Too much packing material and teeny, tiny pieces of styrofoam were spreading all over the place...including Karma's fur--LOL! (I made a trip to the dumpster with my little green cart later on...with a bag of trash, too, while I was at it.) 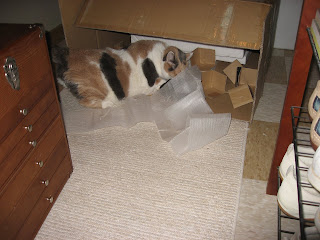 Well, I pulled the cabinet across the floor over to the desk and did a quick heave-ho!! (So glad it has the side handles!) 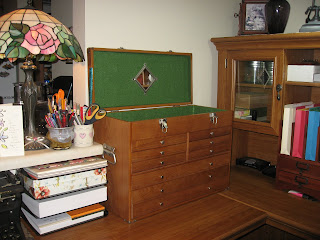 The cabinet weighs about 24 pounds if I recall, so it is a bit heavier than Miss Karma (who I seldom ever pick up as she dislikes it so). But I had to lift the cabinet two-handed. I can do that briefly--a quick lift--but am not supposed to try and do an assisted lift (two-handed) of over ten pounds. Oh well. Not supposed to push and pull or grip with that arm, either, and I already had to do a little of that just getting it out of the box...so what the hell, eh? I've had to do singular things like this over the years since the injury so I know my arm will just burn for a couple of days, I'll just baby it for a while, and it will be okay.
****
Anyways, enough boring arm talk! ;)
I love the cabinet!!! 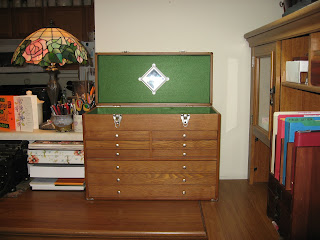 When I took pictures without the flash the wood looks more dull. 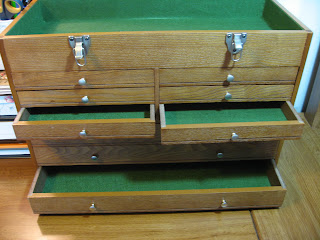 With the flash, the wood looks more colorful and rich than it actually does. 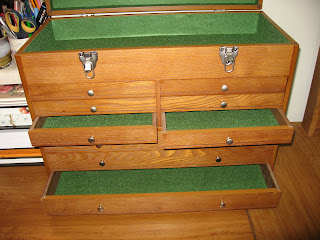 It's actually kind of inbetween, but closer to the first one without the flash.
****
Now, Miss Karma is not supposed to be up on my desk unless I am sitting at it and say it's okay. You can have more say-so when your cat is too fat to jump that high from the floor--LOL! And she knows I'd chase her off if she was up there on her own when I'm awake. She's never allowed ever up on the craft table. (I know she sneaks up on both when I am gone or asleep, of course.)
****
Anyways, her curiosity got the better of her. She didn't think I was looking and popped on up from the desk chair. Was so intently investigating that she didn't even hear me turn the camera on--hehe! 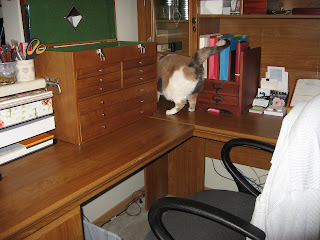 How could she resist... 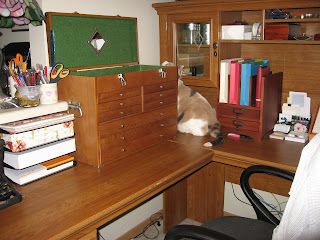 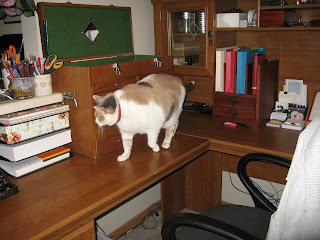 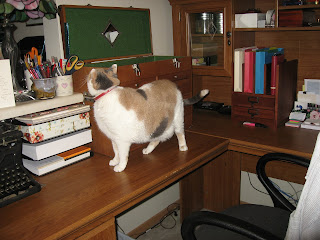 After I took this last picture I said--"Karma!" like I just noticed her. She leapt down using the chair, ran halfway across the room, laid down, meowed, tail flicking, with this "well, what do you expect, I'm a cat" look. I am sure she has smelled it thoroughly while I slept my three hours--LOL!
****
Yes, only 3 hours and I was awake and couldn't get back to sleep. *sigh* I have a terrible headache from not sleeping much for two days, my arm burns, and I am typing with one hand. Don't be alarmed. No biggie about the arm. This is just par for the course in my life since 1993.
****
I laughed when I read Tuesday's nablopomo prompt:
Has anything traumatic ever happened to you? Describe the scenes surrounding a particular event.
****
ROFLMAO!! Which one would I pick?
****
I will have to revisit that one when I can type with both hands and think straight. ;)
****
I actually did find my old protractor before the maintenance man arrived yesterday and did try to make a mandala...or start one...but my circles didn't match up and the protractor lead kept sliding. So, my good intentions ended up in the trash, but I really did try to do something artistic.
****
I think I am going to use one of my stash of discontinued Davocet (pain pills)...zombie out in front of the tube...and hope I get some more sleep here pretty soon. Sorry to complain. Things could be a lot worse. I don't have anything planned for today, so it can be a pajama day. I just need sleep...and eventually I will get some. Plus, if I get pain-restless, I can start filling my cabinet! Whoohoo! Awesome! In fact, that sounds like the best thing to take my mind off feeling so crummy....later gator! ;)
Posted by Rita at 2:54 AM