Have been out of bookcards for weeks, so I threw a few together to tide me over--hehe! These covers are made from 12 X 12 inch scrapbook paper. :) 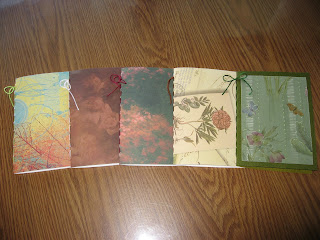 Other than that--have still been on a reading binge--hehe! Was out reading on the porch until it got too dark to see. 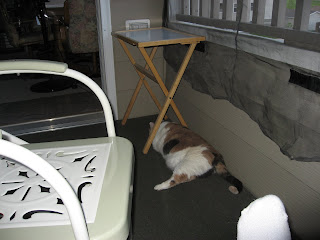 I discovered the zoom on the camera. My enthusiasm drew Karma over to see what was so interesting. She looks like a little Buddha, doesn't she? 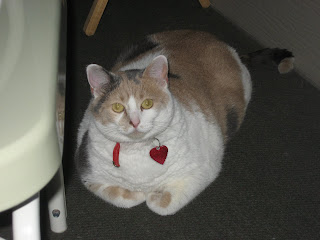 She joined me on the footstool/ottoman--still watching the screen for that bird to land. She'd be happy to see anything...a moth, a June bug....hehe! 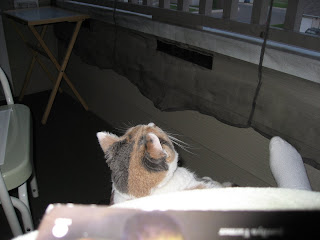 I zoomed (tada!) up over the pillow and book (use a pillow to hold books when I read because can't hold a book very long with my bum arm). 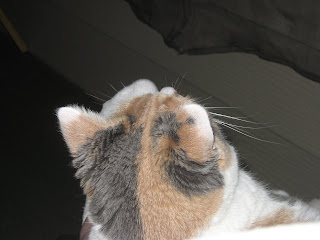 Warning! I have found a new toy--the zoom! ROFL!!
My sleeping thru the night--well, not last night. I was up a few times--first just chilly and then pain dreams. Back to a normal night last night. :( I am hoping it was just a brief revisiting of old habits--chuckle! We'll see.
I've been trying to change in small ways this past week or so (Soul Coaching book)--make new habits maybe? Been trying to remember to take the three flights of stairs when I go to get the mail. Playing music on the newly moved boom box. Using the salt inhaler every morning while I read emails. (Leah has been using hers, BTW, and says it has been helping her breathing a lot! Said she doesn't ever want to be without it!) Been setting the alarm to attempt to stay on days, too. And I guess I could add that--besides all the light, fun reading--I've also been working on the SC book quite often lately, too. (Doing a lot of heavy thinkin'--hehe!) I have several books that you have to actually "work" through: journal, sketch, study, deep contemplation, whatever. I am hoping to get into the habit of having a book like that going all the time.
Since I do believe that everything happens for a reason...been thinking about the car a lot. Trying to "save" the car by not driving it--hasn't worked very well, has it? ROFL!! In my 58 years I have only had a car and driven for about 18 of those years--basically from age 30 to 48. Didn't get a driver's license until I was 30 and basically haven't driven much at all for the last ten years. I am so out of practice--and totally out of the habit, to be perfectly honest. Sometimes I actually forgot that PitaPaseo was out there in the garage! True!!
Since I moved here to Fargo I have been basically housebound due mostly to IBS and other health issues. There's no place close to walk to and a larger, unfamiliar bus system. I don't know where practially every public bathroom is on the bus routes like I did in Moorhead and most places are 2-3 buses away. Due to new medications things have improved physically quite a bit and I should have been getting out and about in the car. ??
Not that I felt like going anyplace with the jaw pain for quite a while there, but now I could be out sometimes. There's no ice and snow anymore. (Pita is not very good in the ice and snow--too low and too light.) And soon it will get so hot I won't want to be in the car much, anyways. (No AC.) Saving gas--well, nothing is very far away up here in the first place. Don't have any reason to go anyplace--could just go to the mall and walk a little. No money--go to the library or to a park to read or write or to attempt sketching. Don't know my way around (except Moorhead bus routes--hehe!)--about time I learn. Ten years and counting, eh? ROFL!!
Bottom line--I think subconsciously maybe I don't want to get used to thinking I can get around again on my own?? It was a very hard thing to adjust to when I moved up here ten years ago--after driving for 18 years--no car. Must be about seven years ago in Moorhead a family gave me an older car--and I was thrilled to have it!! I could take night classes at college, get my own groceries, go visiting.......FREEDOM!! I even made a trip that summer to Minneapolis to visit family and friends and then over to Menomonie, Wisconsin to visit Ruby. But the car didn't last long and something huge went wrong with the axle/tire--gone! I had to get used to being without a car all over again.
Where I lived in Moorhead at the time I still had the buses that I knew well. And I still had many places I could walk to--school, mall, bank, coffee shop, library, post office, etc. But it was still really hard to go through "car-withdrawal"--again.
My health has deteriorated considerably since then. I had to adjust to living here in south Fargo--with no car and no place to even walk to (not that I could have made it out much anyways--chuckle!). But--honestly--it was really difficult adjusting the first year here.
Anyways, I've been thinking about why I haven't been out and about with PitaPaseo? Why I have only driven her when I have absolutely had to and thought of her as nearly an emergency-only vehicle? Well, I think deep-down I haven't wanted to really feel that freedom again, you know? To believe it and get used to it--only to lose it again. ??
Dumb. I know it is dumb. Emotional and not logical. And now poor Pita's had troubles starting--and who knows if we will get her in running order again? (Hope so!) Obviously--I hadn't given any of this much thought until now. But--if PitaPaseo can get back to working order, I am going to try to change my mindset. I will try to get out once a week or so. Anyplace! I have survived car-withdrawal before--I can survive it again, right? I really hadn't realized how negative my subconscious had been about facing that potential loss again. But now that I've dug around in the recesses--(hehe!)--I have to face the challenge. If I am so lucky as to have Pita as a traveling buddy again.
Say a little prayer for PitaPaseo. :):)
Posted by Rita at 7:32 AM