Dagan picked me up and we went to CashWise to return the clay kitty litter. They did take them both back--even the opened one. After that we went to PetSmart and I picked up 40 lbs. of Scoop Away. Then we went to Target briefly, too. Lots of traffic, lots filled--you could tell it was after Thanksgiving and the weekend! 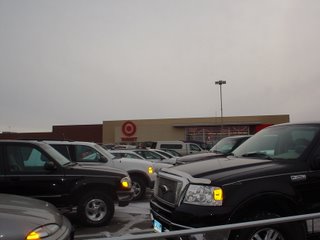 Dagan took me driving around in South Moorhead to show me how much building is going on over there! Lots of duplexs and single family homes just popping up everywhere the last year or so!! (Can you tell I haven't been out of the house for a while--hehe!)

Leah made a scrumptious dinner!! Ham and garlic mashed potatoes...we had a lot to chat about!! BIG NEWS!! Remember Leah's company is outsourcing to India? Well, Leah and another girl have been asked if they'd like to go work at training in the people to work the phones--in India!!! She had to discuss it with Dagan, of course. It is all up in the air and the company isn't exactly sure how this would work--could be gone 2 months or maybe up to 6 months or a year--they aren't sure about the details yet. Sounds like she and another lady, Laura, would go out there for a couple of weeks in maybe February to be able to see where she'd be and what she'd be doing before absolutely finalizing her decision, but she is definitely interested in going. She'll know a little more today maybe--she's having a meeting with one of the bosses to tell him she is interested.

The reason Leah wanted to look for another job is that she loves working with the seniors on the informational calls, but really doesn't like dealing with the doctors/pharmacies and such in this other area. When they outsource to India, over the next year or so, the informational calls from the seniors will all eventually be directed to India. Leah is very concerned that they be trained to just listen and be patient and answer questions honestly (they don't try to talk people into using their program and will give them other options with other programs that would work better for them). The seniors can call up and ask for a certain person to talk to--and they get to be on a very friendly basis. Leah's heart is in that job! She'd feel she was doing something worthwhile to go and make sure the seniors get the kind of service they have come to expect.

Dagan has worked hard to get into the position he is finally in with his new job--has worked years to get to this point. So, he wouldn't want to leave his job for a temporary position in India--even if they did have a place for him there. So, he'd stay here.

It would be very strange not having Leah around!! I would miss her so much!! :( :( But, she'd be doing something she feels she is supposed to do. Unless it is absolutely terrible over there--she is planning on going for it. Dagan is so supportive of her--wants her to do what her heart tells her to do. They were already discussing buying her a laptop with a camcorder and putting a camcorder on his computer so they can talk and see each other! They are going to miss each other terribly!! Neither of them has ever lived alone. They always had roommates after they left home. It will be quite the experience for both of them.

Well, that's basically all we know right now. I'll let you know more when I hear more. But that is really big news!!

Meanwhile--back to the mundane--my porch looks like abstract art! Last night we had wind and some snow. It was windy enough to get what little snow we had thru the screen and onto my porch. I had to go out and retrieve the cardboard box I had out there for Karma--which will be heading for the trash now that it is all soggy. Karma has asked to go out about five times since I got up! She eats the snow! 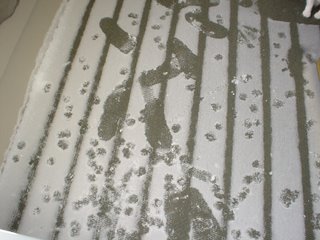 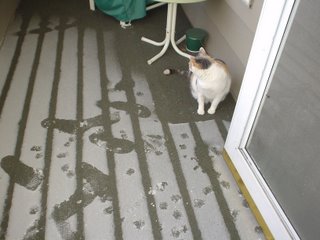 Since there was blowing snow and it looked bad out there, I came home early. Dagan brought me home by 8:30 and, amazingly, I was in bed by 9:30pm! I feel like I am in the Twilight Zone or something--this sleeping so early in the evening feels positively unnatural! It's very nice, true! But it seems so alien to me. :) I really crashed in--till 8:15am!! Only woke up about four times. After the weeks and weeks of sleeplessness, this reprieve is absolutely heavenly!!!!!

Turned out--there wasn't enough snow last night to cover the ground on the field outside my window. Still see mosty dirt and brown weeds with a smattering and speckling of white caught in the crevasses. But the snow drifted up against the building and I could hear them shoveling the sidewalks this morning before 6am.

I came home with leftovers--tada!! So, I don't have to cook for a couple of days. Nice!! I just have to watch the calorie counting!! hehe! I will look up a recipe to make some bean soup with the ham bone, too. (They were just going to throw it away!)