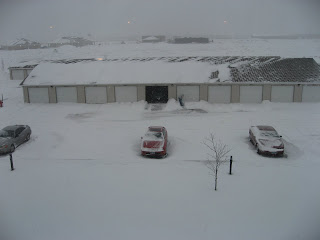 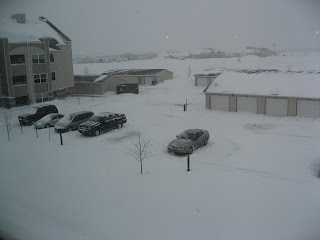 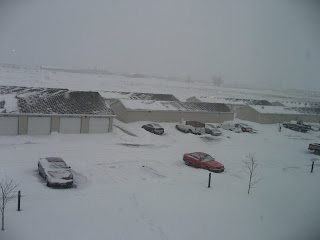 But it was warmer out, so Karma wanted to visit the porch. She is very distressed that the snow reached across the entire porch because of the blizzard. She is used to having carpet to walk on across the back half of the porch. 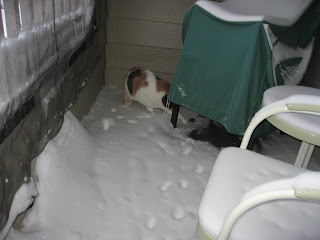 Now the only spot of dry carpet is under the chair in the corner and she has to walk across the snow to get to it. Most annoying for her. 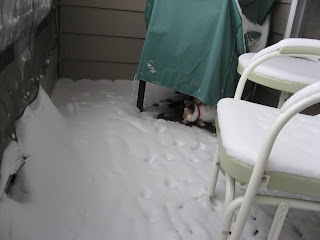 She has taken to begging to go out just to step in the snow and come right back in--thereby tracking snow on the carpeting inside of the apartment that she can eat while being warm. Karma does love her snow--hehe!
Dagan stopped by yesterday with a bucket of cookies from Leah! 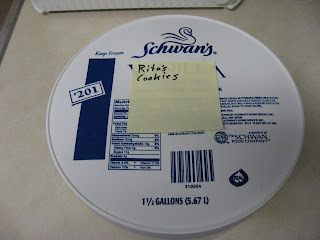 My goodness! She went all out this year! 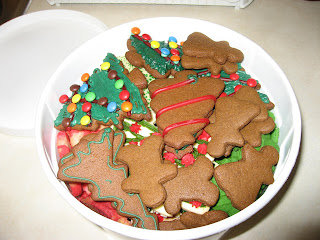 Dagan's interview went well--but they had him sign a form for a credit check. That could be a real negative for him on getting hired. :( We'll just have to wait and see.
Leah sent me some more of the big plastic bags that work so great for loaves of bread--found them at Sam's Club. 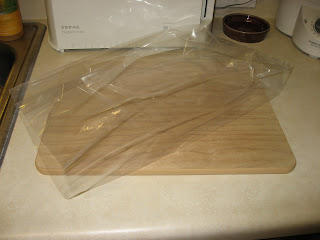 It is so hard to find bags for bread. I have used grocery bags and all kinds of things-chuckle! These are great! Trouble is--what I had to put inside one yesterday.
I have sometimes bought frozen bread dough loaves. I always bought Rhodes in the past. I decided to buy some last month and bought one package of Rhodes and one of Fettings. Thank goodness this is the last of the Fettings! I have never seen anything like it! They collapse in on themselves after they come out of the oven!! They come out looking normally shaped--I went to get the camera, but it was already collapsing. 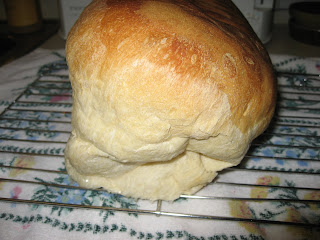 I have tried letting them thaw in the refrigerator, keeping them small and low, and this time letting it raise really high--they all collapsed like a balloon with a slow leak! I even tried to let one cool inside of the pan--and it shrunk away from the pan--kind of curled up a little and collapsed when I removed it anyways. The crust looks really strange, too. Uneven and blotchy. And they all tended to be doughy on the bottom. Edible, but just barely. Isn't this the ugliest, silliest loaf of bread you have ever seen? 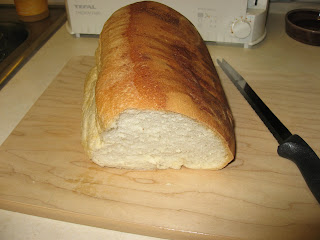 Well, this is the fourth one that I have had to look at--and eat--arg! End of the package--hurray! Obviously, I would not suggest anybody buy Fettings frozen dough.
Dagan and Leah made it to Henning okay last night (his dad's family). The snow had let up quite a bit by the afternoon, but the roads couldn't have been good. I was glad to get a text message that they had arrived safely! :)
If you can believe it--I have been uploading 8 videos since Monday night about 9pm and there are only 6 of them loaded so far!! Good thing I have more time than money, eh? LOL! I think it is because I have the high quality videos, so that's okay I guess. As long as I can finally post them, I am fine with it. I don't really plan on doing much of anything but putter, watch movies, eat Leah's cookies, and hang out with Karma over these next two days, anyways. :):)
Merry Christmas Everybody!!!
Posted by Rita at 7:31 AM

Love home made bread. Haven't had any since we got rid of our bread machine. Yours still looks good enough to eat!
HAVE A MERRY CHRISTMAS, Rita. Our thoughts are with you as we also spend our Christmas alone.

I may be physically alone, but I don't feel alone. :)
Merry Christmas to you both!!