The blizzard has arrived. Took these pictures this afternoon. You cannot see beyond the garages--at all--like a white wall. 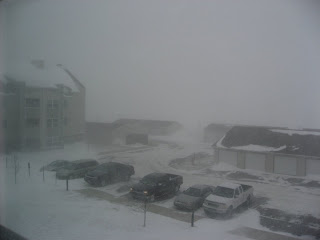 The wind is blowing my direction--plastering the screens with snow. 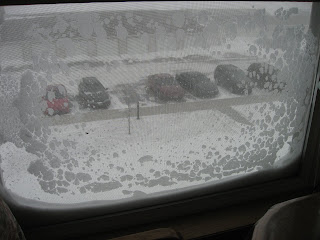 Blowing so hard (30-40 mph gusts) that it managed to blow all this snow right through the screen on the porch! 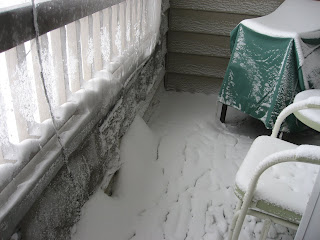 Then it has gusted up between the boards and my indoor outdoor carpeting--making it look like odd waves of snow. 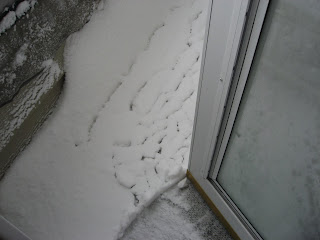 What a good day to be inside--warm and safe. 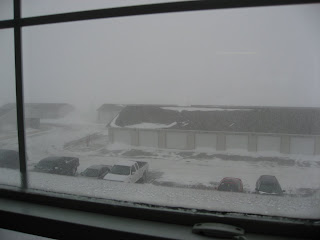 The blizzard has winds that randomly drift the snow. Most of it has ended up against the building. The plow might have been through while I slept all morning--(been working my way around the clock again)--but it could be just the wind keeping sections clear? It is a wicked wind! But it kind of looks like they may have plowed. ?? 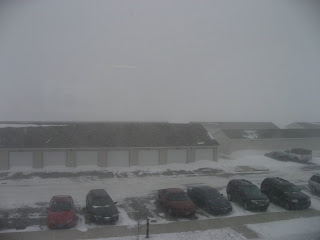 Crazy weather, eh? The wind has been pounding against the building since last night. We are not predicted to be above zero until maybe Thursday--and could get as low as 25 below zero at night. Supposed to be an accumulation of 8-13 inches of snow. Wind chills of 42-47 below. I am so glad this started on the weekend and not when the majority of people are trying to get to work. Wonder what it is supposed to be like tomorrow? If the winds will die down a little? Hope so!
Miss Karma is all wound up about the snow on the porch, but afraid to actually step foot on the porch because of the wind--loud and whipping the screen back and forth--not to mention it is really, really cold out there. She kept begging for me to let her out, but she was too scared when I opened the door. (My photo opportunity--hehe!) But she kept crying to go out--silly thing. So, I finally took one of her bowls and scooped up some snow for her--ROFL!! 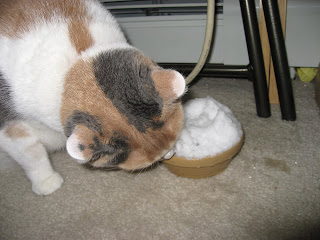 Happy, happy girl!
I had computer troubles again today--same as the last time--froze, restarted it, got the red flashing warning, and it froze again. Then I shut it down again and waited about an hour and it worked? I wrote down what was in the box to show Dagan later. Something about "Delayed Write Failed"?? Computers can be so mysterious. Something about being unable to save some data from a file? No clue.
But--weirder than that--then I went to my backup laptop, right? And it had my emails from November!?? Nothing current. Stuff I had deleted long ago? Like it had jumped back in time like three weeks? I shut down the screen and started it up again and then it was just fine--all current. I do have the strangest things happen to my computers--things nobody I know has ever heard of.
Well, anyways, the desk computer is once again working like nothing happened. Fixed itself? Probably not, since this is the second time it has done this same weird thing about this file it apparently lost, then the red flashing sentence and freezing--hehe! Guess I will have to see if Dagan can come by this coming week and take a look at it. I know Leah isn't coming for crafts on Wednesday. She is going Christmas shopping with her brother and youngest sister. :)
Stay warm! And those of you who are in warmer places--feel free to be greatly relieved you don't live here--ROFL!!!
Posted by Rita at 2:41 PM

that's allot of snow! I've been spending the morning browsing through your other blog, looking at your art-I must get up and get dressed now, but I look forward to coming back and seeing the rest!
have a nice day and hope you stay warm!!
Trish

OH Rita, those pics remind me so much of the blizzards we experienced in Wyoming. The winds were incredible! We even got caught in the middle of a white-out once...that was pretty scary.

Serena-
This was a white-out blizzard--yup! I have been in them driving and it is REALLY scary to not be able to see even as far as your headlights! I've been in rain storms that were the same way, too. Wheel gripping, creepy crawling along--whew! You never forget it! Or the horizontal winds! :)