Karma keeps me company on these cold nights. :) 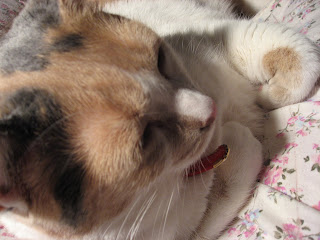 I got a kick out of the weather report last night. They said it was going to be "unwarm" again--hehe! 11 below right now. They reported yesterday that several businesses had pipes burst from the cold and had water damage--including Hobby Lobby--oh no!
Caroline is coming over to clean pretty soon. And Dagan is supposed to come over this afternoon to look at the computer. Maybe he can find out what it was complaining about and why it panicked & was refusing to work for a while?
I watched a very good movie last night--Lantana (2001). There was a murder, but it was also a kind of quiet character study of this web of people--and a good mystery!
Love, sex and deception rule the day in this psychological drama from director Ray Lawrence. Detective Leon Zat (Anthony LaPaglia) dives headlong into a missing-persons investigation just as he's grappling with guilt about his extramarital affair. His case crisscrosses the lives of four couples, all of which have secrets -- including Leon's wife, Sonja (Kerry Armstrong), and her secret psychiatrist, Dr. Sommers (Barbara Hershey).
Well, I've got to get moving here. Have a good day!! :):)
Posted by Rita at 10:26 AM