What a difference a day makes, eh? 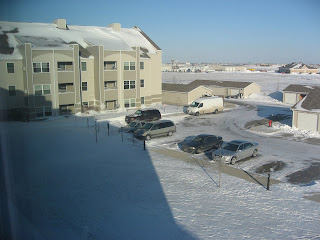 Looks can be deceiving, tho! It is currently 12 degrees below zero. Beautiful day, tho, after the blizzard. :) It was soooo windy that the snow was blown into drifts against the buildings or anything high enough to catch it. Look at the field--bare spots after all that snow! 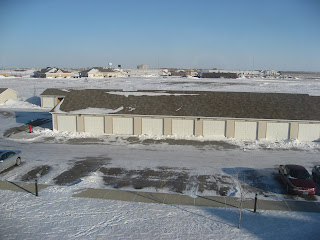 That wind was something else! Hard to describe the sound--kind of like being inside a garage and running the garage door opener up and down--or listening to people drag very heavy furniture across a wood floor. Neither of those descriptions are completely accurate, but it wasn't the usual howling, pounding sounds I have become used to here. (Been in this apartment in Fargo four years now--in the middle of nowhere with no protection from the wind--hehe!) I have also never seen the wind blow so hard that it displaced the layer of snow on the porch in such an artistic manner--hehe! 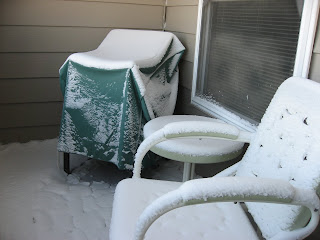 Karma wanted out right away when I got up this afternoon. She is not deterred by the cold. It was the sound of the wind and the flapping of the screen yesterday that scared her. 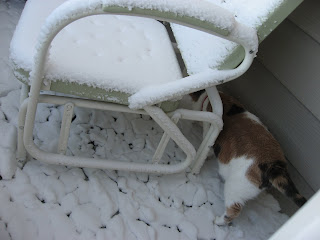 She was able to go out and eat snow today for a few minutes. 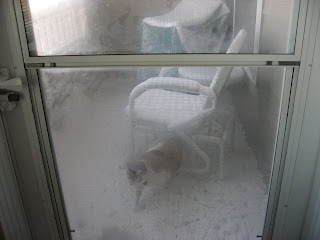 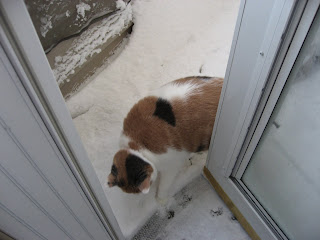 Not going to warm up here any time soon. This was the wind chill last night... 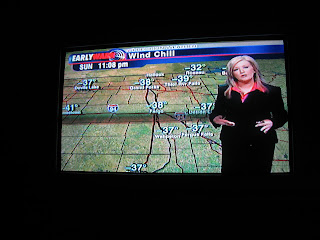 ...and the seven day forecast! 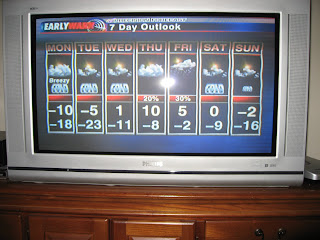 The entire region was shut down. They closed the freeway and main highways--Interstate 94 was closed from Jamestown, ND over to Alexandria, MN--and 29 was closed from Canada down to South Dakota. No church yesterday. Quite a few places were closed or opened later in the day today. They were out plowing in our parking lot from about 2am until around 5am. We are used to snow up here. I'm sure most of the side streets are plowed by now. As soon as the wind dies down (only 5-10 mph again now) you know the streets will remain open after they are plowed.
What cracked me up last night--was watching the closings scroll across the bottom of the screen and this went by: "....No Travel in Fargo....Stay Home...." They have notices that the freeways are closed every so often--(they have huge bars they swing out across the entrances to the freeways and you can actually be arrested if you are driving on a closed freeway/highway)--but they don't usually tell you to stay off the roads in town right on the scroll bar--hehe! Or I have just missed it? I'm sure if they could have "closed" Fargo/Moorhead and made it against the law to drive in town, I think they would have! hehe! There are always people who are still out and about for no good reason--chuckle!
Anyways, done with the blizzard. Now it is just the warnings about dangerously cold. And I just heard on a news blurb that a woman was arrested at a trailer park in Grand Forks because the neighbors reported a young child outside with just a t-shirt, shorts, and boots on at 8:30 this morning when it was 14 below! The child is okay. Neighbors must have reacted really fast because skin can freeze pretty quickly in this weather. The roving weather reporter last night had goggles, a complete face mask, and fur-lined parka--no skin exposed. (That was originally why I grabbed the camera--wanted to show you but I was too slow.) We had the national weather folks stranded here with us, too--hehe!
Well, that's the latest from Fargo--hehe! Stay warm and safe!
Posted by Rita at 2:49 PM