First of all--the big news! Dagan got that job with the insurance company!!! TaDa!!! :):):) So happy that they are starting out the new year with both of them employed!! He called me mid-afternoon and told me that he stayed home from the Canada trip (Leah went with Chuck and Michal) because he starts work tomorrow--today--the 31st. If he started in 2008 then he qualified for something this coming year with the 401K and they didn't want him to miss out on that, I guess. Nice! I'll find out more today because Dagan is coming over after work (oh--doesn't that sound nice?). We're making spaghetti and he'll stay for my welcoming the new year ceremony, too!! Not predicted to snow--the weather is always a consideration, of course. It won't be at midnight, either, this year because I am working my way around the clock and fading away around 9-10pm. So, we'll do it earlier in the evening and he can get back home earlier, too. Been awful cold again--17 below. Feels like it in here--had to turn the heat up this morning when I got up. Says 44 below wind chill this morning--brrr!

Anyways, I can see why Karma looks out the window all the time--ROFL!! Now that I had to actually go out and shovel yesterday I was looking out at the snowstorm more than I would have and there was a lot going on yesterday--hehe!

This snowstorm was a goodie! There was a layer of ice under the snow--making it very interesting to navigate--even on foot. Caroline was supposed to come to clean yesterday. I decided to walk out the one light bag of garbage I had and thought I'd go over to my garage and maybe push out some snow before the snow plow came--get a leg up, you know? Ha! No way!!
I took these pictures standing by the dumpster--which provided a slight wind break--very slight. I had to toss the bag up and over (good thing it was a light one!) because of the drift in front of the dumpster. 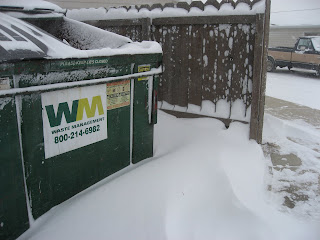 To the right of the dumpster--going in a circle--is a dumping spot for the snow plow right there inbetween the garages. Look how high it is already and the winter has just started! 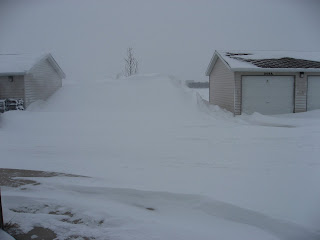 I can't remember if I am the fourth or the fifth garage in that middle section there, but I went--forget it! I decided to wait until after they plowed. Those snowdrifts are about three feet high and it would have been a challenge to just make it thru them to get to the garage door. I checked out the lot--this was about 10am--and decided I'd better call Caroline and tell her not to come. 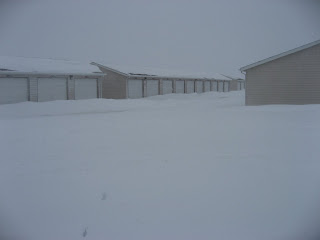 This is my building. My apartment is on third floor on the far end there. The smaller building beyond that is the office building. 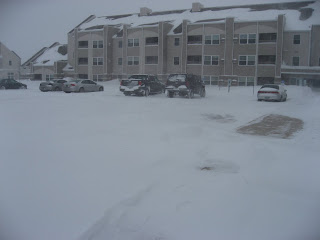 Here's the view from the dumpster to the main door. Another pile of snow from the plows is on the lawn. I took my first moving video--walking from the dumpster to the door--hehe! The wind was so strong I thought it was going to knock me over--and you had to watch your step because of the ice. The dumpster seems like a long trek in this kind of weather--hehe! (P.S. I picked up the trash on my way out to shovel later. That empty bag had just floated up and down the tunnel of a sidewalk for hours--hehe!) 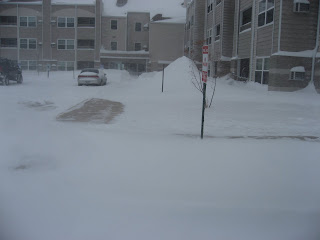 I called Caroline and told her she'd never make it in and out of here because they hadn't even started plowing because it was still snowing. We switched to next week. Turns out that will work better for her because she has a class every other Tuesday and it was on the day she came to clean--so this will make things easier for her. There's always a silver lining, right? :)

I also took a video of this poor girl who thought she was going to get out of here yesterday. Her car was stuck spinning its wheels on the ice--on the right there. 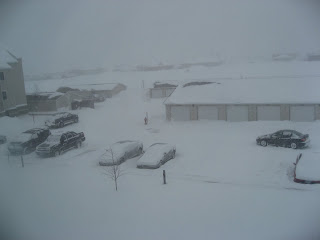 Her car was sliding and facing every which way. She went to the office and got a pail of salt--which helped it to slide about more, but she wasn't going anyplace. The scariest thing--never seen anything like it!--was before she went to the office. She had been stuck with spinning front tires for quite a while when I saw her get out of the car--the front wheels were still spinning!!!--and she walked all the way around the car and was trying to kick the snow built up behind the tires!! I guess she figured the car wasn't going anywhere--but I was worried until she got back in and the wheels stopped spinning. 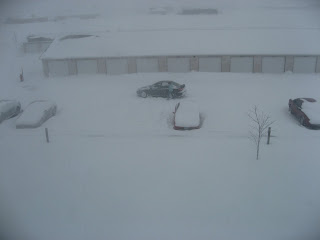 She finally zigzagged and fishtailed around until she got back into the spot she pulled out of. The maintenance man came and helped shovel out the spot she was trying to get into--had already drifted over.

Later the mailman made a mistake and paused--probably wondering where he should park in the half plowed parking lot--and then he was stuck spinning his little mail truck wheels on the ice, too. A policeman drove up (we rarely see them here--thank goodness!)--and the mailman asked the policeman to help him. He did and they got it out--with the mailman pushing the truck. 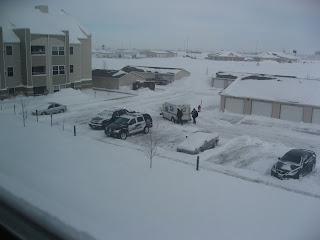 After the big plow went through, then the little one comes and works on the cleaning up of the parking spaces, etc. They got the snowblower out again. The sidewalk had been blown out just about four hours before--and you'd never have known it. Drifted over. (And then we can't get out the doors sometimes.) 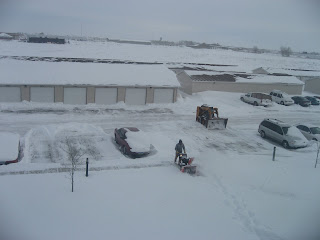 By midafternoon--the sun had come out and the big plow had been through. So, I bundled up again and went out to my garage. I was thrilled at the good job they did this time! Got really close to the garage doors--so there wasn't as much to push away with my new shovel. :) To give you an idea--if you look closely you can see the one long mound of snow that ran right down the center of the road--the whole length of all the garages (they came back later and hauled it away). Well, that mound was about a foot to a foot and a half high and a couple feet wide. Looks like nothing in this photo there beyond my pushed snow--a tiny little bump, right? hehe! Well, you know--white on white on white--it all blends together, right? 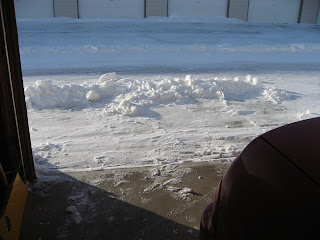 BTW--this shovel worked really, really well, Leah!! I pushed all this lighter snow away with one arm--no problem!! TaDa!! Thanks again!! You're an angel!!! :):) 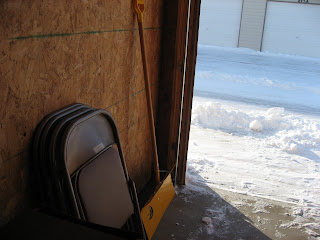 I made soup on Monday. End of the month soup--hehe! Used a package of the soup bones Dagan and Leah brought me. Threw in what I had left in the pantry--chick peas and kidney beans and barley. May not look like much, but it is really yummy to me!! Was nice to heat up a big bowl of hot soup after being out shoveling snow. Was so cold that your cheeks burn when you come in and you can't see until your glasses warm up--chuckle! They frost over when you walk inside. 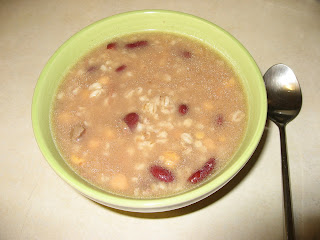 I was in my nightgown--7:30pm--fading away for the night--and there was a sharp rap on the door and feet hurrying away. It was the poor UPS person--trying to finish off the run for the day. Can only imagine what they had to deal with all day. My order arrived from this new art supply place (fineartstore.com). One item was backordered--another small paint kit with metallic paints. 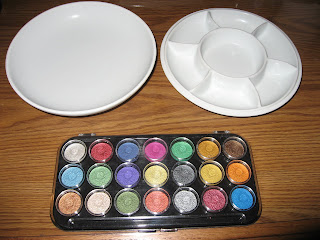 You know how I love porcelain palettes! Well, I haven't seen this one very often in the catalogs or online--and this company carried it. Why did I want it? I love the fact that it has a cover!! 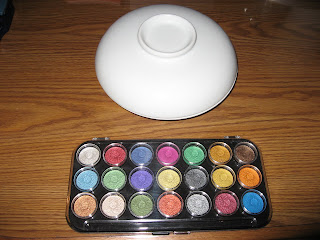 I can leave rewettable paints and inks in it and cover it away from little tongues!! Karma loves to lick paints and inks for some reason. This is also too heavy for her to push the top off. As far as I'm concerned--I suppose I could consider this a late Christmas present for Karma--ROFL!!

We broke the record for snow in December. Over 33 inches. Yet I can look out at the fields beyond the garages and see the weeds poking up thru the snow. That just tells you how friggin' windy it is here--ROFL!!!

Have a good one!