My Monk's Porridge Experiment--hehe! Here's the porridge I made up yesterday. 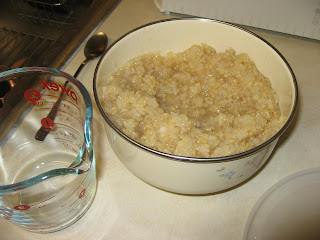 I had some Nori in the pantry that I bought for some recipe--never used it. Actually have no idea what it is--hehe! I was supposed to cut these sheets into tiny squares to sprinkle into the porridge--but couldn't even manage to cut through one layer with a knife. Tough stuff! Dull knives? 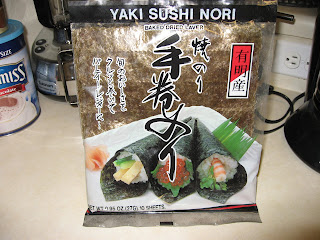 I ended up washing a pair of scissors and cutting them up. I'm storing them in the mason jar. 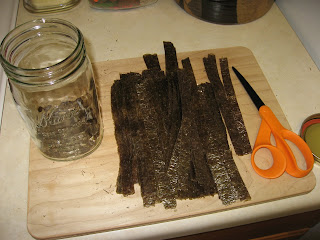 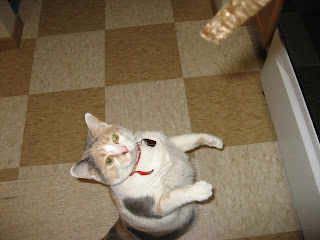 She cried and begged and danced! 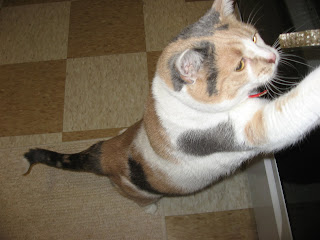 I gave her a strip of it and she ate it right down! ?? 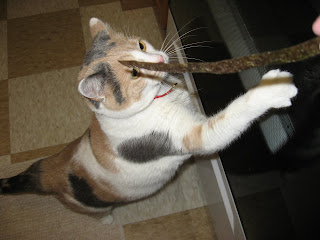 It's a puzzlement to me. Neither one of us has had any previous nori contact--hehe! I didn't think it had that much of an odor--but she was crying before she ever laid eyes on it? And I certainly couldn't understand the actual appeal when I popped a piece in my mouth. This is a cat that needs to be coaxed into eating actual pieces of chicken! Cracked me up!
Anyways, I tried making the monk's porridge with some chick peas, nori, and a little tamari sauce. 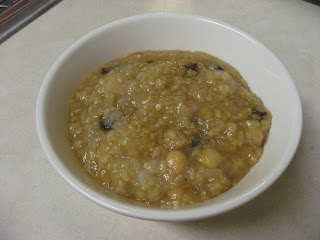 Was okay--I ate it. But didn't seem like breakfast fare to me at all--chuckle! Really filled you up, tho!
Okay--Dagan and Leah are off on their annual trek to Canada today with Chuck and Michal to visit friends over New Year's. Well, yesterday I went outside to check and--ya!--no way could I get the car out of the garage. Had almost a three-foot snow drift up against my garage door. So I called the kids to see if one of them could come and shovel me out before they left town so I could go buy a snow shovel. (Remember--I haven't had a car for many years--no shovel--and I can't lift with my bum arm--need one I can push.) More snow was on the way, too, and they were going to be gone until January 2nd. I thought maybe Dagan could come, but Leah said she would come and shovel the snow--AND that she had already picked up a shovel for me!! Said that she just kept forgetting to bring it over. (But then I haven't driven the car for weeks and weeks--since pre-snow--hehe!)
So, Leah came over and freed my car--tada! And then we went to the post office (mailed off the rice paper journal to your friend, Ann!) and three craft stores. With all the sales going on I wanted to see if I could find some border punches I liked. Have always wanted some, but they are pretty expensive! ($14.99) Got them for 30% and 50% off at two different stores. Couldn't find the one I fell in love with online, tho. The one on the left is made to be threaded with ribbon and the right one can be used as is or threaded with something very thin like yarn or embroidery thread. 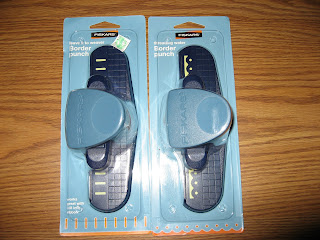 Our running around was quick. We hit the Post Office, Hobby Lobby, gas station, car wash, Micheal's, and JoAnn's in a little over an hour! When you know exactly what you are looking for...hehe! But I have to kind of put blinders on in those craft stores and make a bee-line in and out--hehe! The temptation! Oh, the temptation!
I also got the zippers I needed for the eventual shoulder bag sewing challenge for this winter. And we got some blades for our Fiskar cutters.
Thanks, Leah!
Thanks, Leah!
For Everything you do for me and just who you are!!!
Later on last night I searched online to find the border punch I wanted on sale--no luck! So, as a Christmas splurge I ordered it at full price.
I worked on birthday cards yesterday. Made a couple more videos (which are still uploading--I think one might be up). Caroline comes later on this morning. And I will have snow to shovel this afternoon. :) We have had 4 1/2 inches so far since midnight--supposed to let up by this afternoon. And so it begins....hehehe! I have avoided the battle with the snow all these years without a car. Always pro and cons, eh? Chuckle! More than worth it! Don't get me wrong. :):)
Tomorrow is New Year's Eve already!! Need to check that I have all my ducks in a row for the new year, eh? Exciting! 2009 is near! :)
Posted by Rita at 6:01 AM