Traffic on Interstate 94 was at a standstill yesterday. Leah snapped these pictures when she left to run some last minute errands yesterday in the early evening. So many roads are flooded or icy or too much snow around town (they only plowed emergency roads after the last snowstorm) that main roads were the only safe travel. 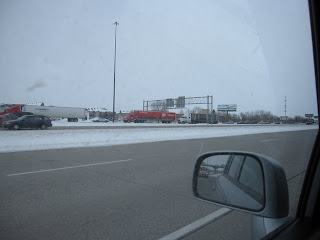 No surprise that they are asking for no traffic at all today in Fargo Moorhead area except for emergency vehicle and vehicles related to sandbagging. 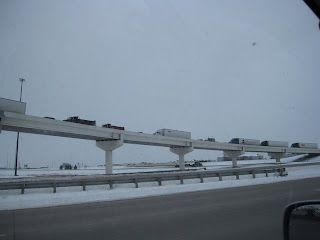 They scrambled like crazy yesterday to raise all the dikes to 43 feet because the prediction went up to 41 feet--and since then they say it could be 42+ feet at the crest. It was just over 41 in 1997 and we surpassed that record already. The sandbags were freezing so that they couldn't be fit as tightly--creating more fear of leakage. In different places in North Dakota (the entire state is having problems with flooding) they are using dynamite to bust up ice jams.

Dagan and Leah stayed with me last night. They left around noon today to go home and shower and change. By now there are less places to go and sandbag--and they are shutting down sandbagging operations at 6pm tonight. They don't want people to be traveling at all. All unnecessary businesses have been asked to close today. Home Depot and I would imagine Lowes and Menards are open for flooding supplies. Moorhead and Fargo schools are closed all next week.

Water and sewer has been turned off in the mandatory evacuation area in Moorhead. If I was still in my old apartment--I would have been in the evacuation area. Goes from 94 to north Moorhead by Moorhead Center Mall, etc, and all the way across east to 8th Street (and I've also heard to 12th at one point--which is almost over to MSUM, too?). Code Red. Concordia College is in this evac area. There is a "suggested" evacuation area in Fargo, too. I missed exactly where that area covered.

The stand-off has begun. Supposed to last for the next 5-8 days before the water recedes. More water is coming from the south. (The Red River runs north up here.) The Red River is supposed to crest within the next 24 hours or so--but the sandbag dikes have to hold until the water subsides, of course.

There are constant 24 hour dike patrols and dumptrucks of sand traveling about to help plug up the gaps they find in the existing dikes. The National Guard is here to help protect property and patrol the dikes. Red Cross is here to help with the evacuated folks. Some people in town near the river are not evacuating--have 43 foot dikes and generators and pumps--and back-up pumps, etc. Leah's mother lives up by the Oakport area where the flooding is pretty bad and they have already lost some houses to the flood. She and her son Aaron are now cut off--surrounded by water--last I heard. She calls Leah for reports on the flood levels--she's lost her Internet service. She has a generator and still has electricity. They drug up most everything they could from the basement--she could still get more water--but she's holding her own so far. She has a boat, but can't use it right now because of the icy water and doesn't need to get out for anything. They're stocked up.

People are being relocated to shelters--high schools, community centers, etc. They are busing them from parking lots--like WalMart and Target. MeritCare Hospital on University is being evacuated. They keep showing the lists of what to do when you evacuate before you leave and what to take with you. I even got a call this morning from my state worker asking if I was okay or needed any help. I am fine--thank goodness. And even if the water flooded way over here to where I am--I am sure glad I am on third floor--no problem for me. I have lots of liquids and edibles and would be okay.

Dagan and Leah--the Sheyenne River was previously diverted--so Dagan and Leah's place is supposed to be okay because they don't expect the Sheyenne to go over 23 feet. The Sheyenne River level mysteriously dropped--ice jam? But so far, so good where they are, tho. West Fargo is one of the safest places to be apparently. And my area should be fine, too, I'm a few miles from the Red River.

One of the problems is--we are still getting snow and they are not really sure about the weather. First they were predicting rain coming next week and now maybe more snow instead--but hopefully it will stay light. All this snow we just got could melt rapidly again if it gets too warm--so we are hoping for cold for a while, actually. Makes it awful for the people who are out in this sandbagging, etc--but we are better off with cold and snow right now.

There is nothing to compare this to. Since recorded time--there has never been this much flood water up here--ever. And the water is still coming through for the next several days from the south. It is a sit and wait and see how high it gets and if the dikes hold. This sandbag dike stand-off will last at least a week from the sounds of it. They are hoping it won't be as bad as Grand Forks saw back in 1997 where the entire town was under water.

It is amazing how well organized and calm the response and activity has been all along. You know us stoic Midwesterners--hehe!

Dagan and Leah kind of felt bad that they weren't out sandbagging someplace yesterday--had to stick around and take care of me. And by today--they could stay home--and watch the Sheyenne River out their back door with Chuck and Michal--hehe!

They left about noon. I'm a bit shaky today, but better as the day goes on. I hadn't eaten for so long. In fact, I am finally having some split pea soup as I have been taking breaks here while I type-- little by little--and listen to the breaking flood watch news on TV all day. I feel much less shaky now than when I started writing an hour and a half ago. Time to take more pills and curl up with my heating pouch thingie for my chipmunk cheek. :):)
Posted by Rita at 2:18 PM

It sounds so similar to the flood crisis in Townsville, in the north of our State. Keeping you all in my thoughts and prayers. Stay safe, warm and dry....(((Hugs)))

The cresting is now expected on Sunday. And it is supposed to take days to subside. We are just hoping the dikes all hold! You went through flooding and fires--so much going on all over the world, eh? People come together and help each other. :):) Going to be a hold your breath weekend up here.