Blizzard raged all day and night. Look at the drifts we had by the afternoon! 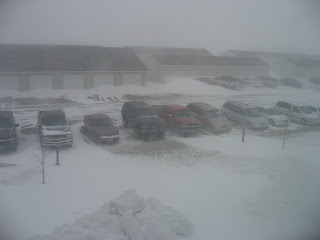 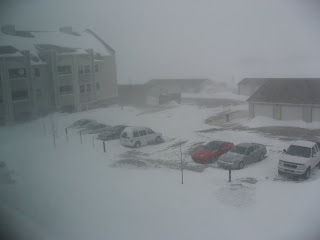 What did I do? Finished up the bookcards and made some YouTube videos while I did--tada! I put this flower stamp on the front of seven of them. Left them out to dry overnight. 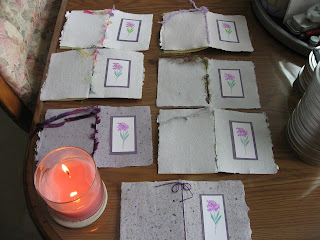 I used the watercolor technique with the markers and the mister to stamp the flower. Had to let them dry flat so that the damp paper (from the glue) didn't wrinkle the inside paper. 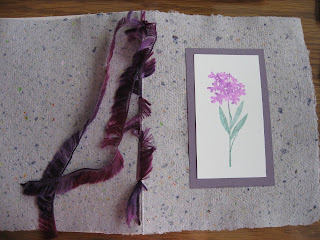 Here's the rest of them--23 in all. I really went crazy with the yarns this time. That was fun! 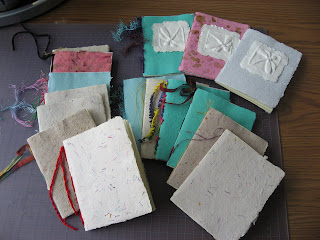 Was up late and couldn't sleep. Walked down with mail at 3:30am. Here you can see a little of the crazy snow drifts. 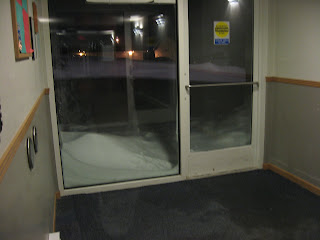 They came up the windows even here. 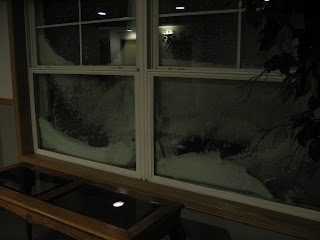 Karma thought she wanted to go outside at 4am--hehe! Was so windy and snow everywhere--she changed her mind. I gave her a little snow and she was happy. 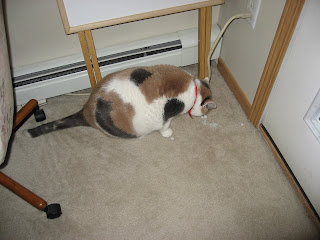 What a difference a day makes, eh?? 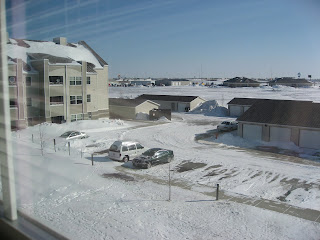 They were plowing early this morning (after I went to bed at 5am). That one handicapped spot--that car's front end is partially buried! The one next to it was, too, but they got that car out of there, I see. I can't believe the size of the snow pile between the garages back there! It is now almost as tall as the garage roof peak!!
Karma made it outside this morning. Complaining about having to walk in the deeper snow again, of course--and yet she went out and dug in it with her paw!?? 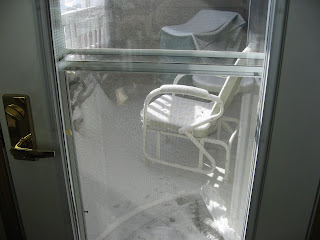 I haven't heard from Leah yet. Not sure if she and Amber will be by today. It is sure a beautiful looking day--but it's bitterly cold out there!! They have wind chill warnings out for today. At least the storm has passed. :):)
This blizzard was worse than the last one. There was zero visibility outside of town--highways closed all the way to the Canadian border--more businesses closed--AND the mailmen were even pulled off the roads by the afternoon! My mail lady was here earlier, so I had DVDs to watch--which was especially nice in the middle of the night when I couldn't sleep.
I watched Milk with Sean Penn.
Sean Penn (in an Oscar-winning role) stars in this fact-based drama about Harvey Milk, the openly gay activist and San Francisco politician who was murdered along with mayor George Moscone (Victor Garber) by disgruntled city employee Dan White (Josh Brolin, in an Oscar-nominated role) in 1978. Director Gus Van Sant's compelling biopic (nominated for a Best Picture Academy Award) co-stars Emile Hirsch, James Franco and Diego Luna.
I liked that they incorporated real film from back then in the 70s. I watched the bonus material, too. They used many people that knew Harvey Milk for small parts in the movie and/or as consultants for accuracy. Was very good. I remember watching the some of the events on the news--from the first gay pride parade to the silent candlelight march after the mayor and Harvey were murdered. What I didn't know was what happened to the guy, Dan White, who shot them. (The "Twinkie" defense--junk food made me do it--duh!) He only served five years for the two planned, cold blooded murders. A couple years after he was released--he killed himself. Times have really changed since then. Never think one person can't make a difference, right?
Besides Oz, I am also watching a British series called Wire In The Blood...
Based on books by award-winning Scottish crime writer Val McDermid, this BBC series centers on Dr. Tony Hill (Robson Green), a bookish psychotherapist who uses his intellect to solve crimes that keep crossing his path. Working alongside dogged detective Inspector Carol Jordan (Hermione Norris), Hill sheds light on the criminals the local police can't catch, helping to make the streets of Bradfield a safer place.
...and for comic relief--Arrested Development--hehe!
Arrested Development follows the adventures of the dysfunctional Bluth family after patriarch George Sr. (Jeffrey Tambor, in an Emmy-nominated performance) is hauled off to jail. Responsible son Michael (Jason Bateman) takes over, but even he's no match for his crazy siblings and sharp-tongued mom. Jessica Walter, Portia di Rossi, Will Arnett, Tony Hale, David Cross, Michael Cera and Alia Shawkat co-star in Fox's critically praised sitcom.
Can't tell I love to watch assorted TV series from Netflix, eh? hehe!
Well, I guess I should try and contact Leah and Amber and see what's up today? :) :)
Posted by Rita at 11:02 AM