Leah's friend, Amber, came up to visit and they were thinking of coming over yesterday, but we had a good snowstorm going on. I snapped a picture downstairs. It never looks quite as bad from my bird's eye view on third floor--hehe! I brought garbage out yesterday and there was quite a bit of snow to trudge through and there was ice underneath--very yucky! 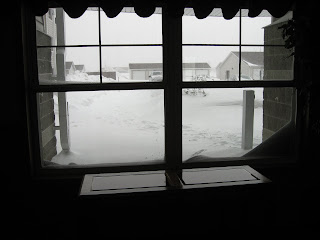 I worked on the bookcards yesterday--and finished sewing them together last night!! tada! Left a few of them with pieces of yarn long enough to be built-in bookmarks--hehe! I'm going to make a video later today. :) 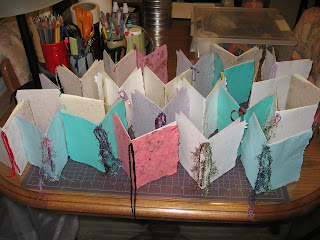 Yesterday was bad, but today is worse! We've got a blizzard going on! Can't see past the garages out there--a white out--again. They closed the Interstate from here to Jamestown already last night. This morning--all the major highways are closed, buses aren't running, schools are closed, businesses are closed, and they announced that they are not plowing residential roads at all until conditions improve. We're pretty much shut down up here. No travel advised--at all--period. The plows cannot keep up with the drifting snow and you can't see to drive really, anyways--hehe! Has to be really bad up here for them to close the freeways and highways--taking the semis off the roads, you know. As soon as the wind lets up, tho, we'll be plowed out in about a day. The ice might still be a problem, tho. ??? 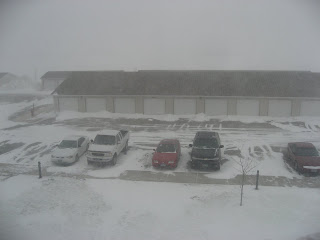 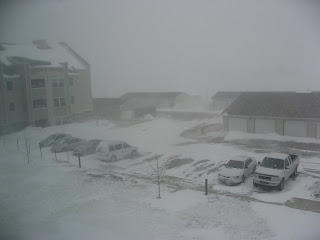 Karma's porch is going to be quite covered with snow again. The wind is pounding against the building. Won't see Leah and Amber today, either, that's for sure. Much worse out there than yesterday.
Karma is funny! Since it had been in the 30's and the porch carpet had been dry for a couple of weeks--well, she's acting like it is the first snowfall again--chuckle! (Short term memory loss?) All excited to go out and eat the snow since it "reappeared" yesterday! She's been out twice already since I got up today. But in a couple of days she'll be all annoyed and crying because she has to step in snow again out there. Cats!! Gotta love-em!
Me--I think I am going to add a little something on the front of a few of the bookcards for a little variety. I have three new Netflix DVDs. Funny--being snowed in is not different than most any other day for me, is it? ROFL!! :):)
Posted by Rita at 10:43 AM